Despite being worth over a billion pounds to London’s real economy, attracting one a half million visitors from across London and the world, thirty thousand exhibitors, hundreds of events each year, the Earl’s Court Exhibition centers in West London that sustain thousands of jobs are threatened with demolition with plans to replace them with mostly extortionately priced homes. 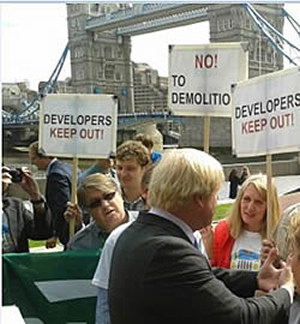 By Darren Johnson, Green Party member of the London Assembly

Despite being worth over a billion pounds to London’s real economy, attracting one a half million visitors from across London and the world, thirty thousand exhibitors, hundreds of events each year, the Earl’s Court Exhibition centers are threatened with demolition with plans to replace them with mostly extortionately priced homes.

The fate of this iconic and successful shop fronts for selling the events and exhibition industry now lies in the hands of the Mayor of London.

The joint planning application from Hammersmith & Fulham and Kensington & Chelsea Councils have now been referred back to the Mayor of London for his final decision, which he is obliged to make before 4 July.

One would expect the Mayor of London to have fought tooth and nail to protect this vital economic asset, particularly as it fits so closely with his 2020 Vision aim of attracting more investment into London, or lose out to global rivals.

Yet he has been ominously silent in the role the Exhbition centres play in attracting business from all over the globe and for the growth of the expanding exhibition and events industry.

Could this silence be explained by the demolition plans having been conceived in conjunction with the Mayor’s own planning team; Terry Farrell a member of the Mayor’s Design Advisory Panel producing the masterplan; for the fact that this location only became an opportunity area in the latest revision of Boris Johnson’s ‘London Plan’.

If the Mayor makes the disastrous decision to approve this application the winners will not be your ordinary Londoners, or local businesses, but the developers, overseas property speculators, landlord investors, the super-rich and privileged who will be punching the air with happiness and competitor nations who will happily fill the profitable gap created by the loss of London’s premier exhibition space.

The plans will also see an increase in car park spaces to a total of 5,124, up by 2,000 over the existing parking availability in this highly congested area.

Not only is this contrary to the Mayor’s own policies on developments being at least ‘air quality neutral’, but it will encourage further traffic and pollution into this area that already widely breaches annual legal pollution limits adding further misery to vulnerable residents with respiratory diseases and children with asthma.

The other losers will be the residents of the West Kensington and Gibbs Estates whose estates will be demolished, the 550 people employed at the Lille Bridge Transport depot, local residents who will have to put up with twenty years of noise and dust pollution during the construction phase, or end up having their homes overshadowed by the new blocks.

This is a defining moment for the Mayor of London and for his credibility as a promoter of London’s real economy. Supporting the demolition is the equivalent of shooting the goose that lays golden eggs and turning this area into a playground for the super rich.

The generations of Londoners who have regularly visited the centres, or have just been to one Ideal Home Exhibition, or appreciate it as part of London’s heritage, may not be so forgiving or understanding when they find out that this scheme was conceived under Boris’s watch and then sanctioned by him.

That is why I backed the ‘Save Earl’s Court’ campaign and in a joint London Assembly Green, Labour and Liberal Democrat letter (2 July 2013) called on the Mayor to defer his decision until a full independent economic impact assessment on what the loss of the Exhbition Centres will mean to the local and national economy, and until Transport for London has finished its assessment of alternative locations and general impacts of the Lille Bridge Depot, which is due in December 2013.