The argument for keeping the Trident nuclear deterrent boils down to the following: by getting rid of Trident Britain will lose its position as a leading world power; it will also leave the country open to attack by hostile powers. 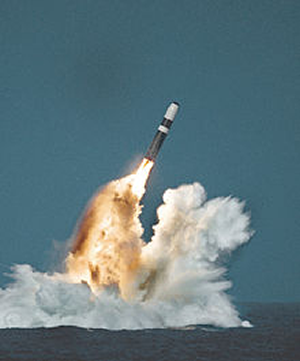 The argument for keeping the Trident nuclear deterrent boils down to the following: by getting rid of Trident Britain will lose its position as a leading world power; it will also leave the country open to attack by hostile powers.

That is, at least, the reasoning according to a letter from five former defence ministers published in today’s Telegraph.

The intervention is timely in that today the Liberal Democrats will present the findings of a review into Trident to the House of Commons. The Telegraph reports that “the Lib Dem review is…expected to suggest halving the number of Vanguard submarines from four to two, a move which would leave the country without continuous nuclear-armed patrols for the first time since the 1960s”.

For Trident advocates global politics is indeed frozen in the 1960s – a period when the world was on the brink of nuclear war. Britain not being ready for an all-out thermonuclear war is apparently unthinkable, even though the world has changed dramatically since the days of the Cuban missile crisis and the blockade of Berlin.

Like the ossified generals who believed that Bayonets and cavalry could be used to fight the Nazis, proponents of Trident remain trapped in the ere of Mutually Assured Destruction (MAD) where a first strike is always imminent.

The huge black fly in the ointment, however, is the fact that, thankfully, the Berlin Wall did come down, and the Cold War has been over for a considerable period of  time.

This is not to adopt the naive pacifist/isolationist position which says that all Britain has to do is retreat into its shell and the world’s demagogues will suddenly play nice. There are (and probably always will be) pathological movements that wish to do us harm out of a fundamentally rejection the idea of a free society.

But confronting the threats of today with nuclear weapons is as archaic as attempting to fight tanks with a blade attached to the barrel of a rifle would have been 70 years ago.

Trident categorically fails on its own terms, for there is very little to suggest it would ‘deter’ anybody. Let us remember that Britain was a nuclear power when Egypt nationalised the Suez Canal and General Galtieri invaded the Falklands; and the possession of a nuclear arsenal did little to dissuade either party from their course of action – for the obvious reason that we could never morally justify using such a weapon; at least not without the authorisation of the United States, making the phrase “independent nuclear deterrent” something of a misnomer.

As for today’s letter to the Telegraph, back in 2009 a letter sent to The Times signed by a group of senior military officers said the following:

In reality, having nuclear weapons is likely to encourage other states to pursue their own nuclear capabilities. When a person questions why Iran is not allowed to develop nuclear weapons when Britain has them, it may be a slightly disingenuous point – Britain is a democracy, after all, while Iran is a theocracy which executes homosexuals – but it does contain an important truth: you cannot preach non-proliferation, nor expect it, while simultaneously building up your own lethal nuclear arsenal. Why assume that other states won’t also view nukes as a virility symbol?

Anyone who has ever cracked a joke about nuclear weapons, or who has reflected on what we might do with them were we to go to war, or who has accepted them as an everyday part of civilisation, like the car or the internet, ought to ponder this paragraph from John Hersey’s book Hiroshima, a disturbing piece of journalism based on interviews with survivors of the atomic bomb the United States dropped on Japan on the morning on 6 August 1945:

“Mr Tanimoto found about twenty men and women in the sandpit. He drove the boat onto the bank and urged them to get aboard. They did not move and he realized that they were too weak to lift themselves. He reached down and took a woman by the hands, but her skin slipped off in huge, glove like pieces. He was so sickened by this that he had to sit down for a moment. Then he got out into the water and, though a small man, lifted several of the men and women, who were naked, into his boat. Their backs and breasts were clammy, and he remembered uneasily what the great burns he had seen during the day had been like: yellow at first, then red and swollen, with the skin sloughed off, and finally, in the evening, suppurated and smelly. With the tide risen, his bamboo pole was now too short and he had to paddle most of the way across with it. On the other side, at a higher spit, he lifted the slimy living bodies out and carried them up the slope away from the tide. He had to keep consciously repeating to himself, ‘These are human beings’.”

The fact that the idea of a nuclear free world sounds hopelessly romantic today is proof not of how rational it is to possess nuclear arms, but of how our political establishment is still frozen in a Cold War mindset.

And yet over the next day or so it will be those wishing to spend tens of billions of pounds on a weapons system that can never conceivably be used who will be portrayed as reasonable, commonsense voices ensuring the continued presence of Britain at the world’s ‘top table’.