This weekend a coterie of British businessmen including the arms dealer Rolls-Royce were jetted around Kazakhstan on board the private plane of its dictator Nursultan Nazarbayev, who has ruled the large Asian republic for 23 years by filtering oil revenues into his private bank account and cracking down on dissent. 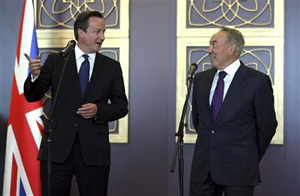 James Elliott is a journalist who writes for the Huffington Post

This weekend a coterie of British businessmen including the arms dealer Rolls-Royce were jetted around Kazakhstan on board the private plane of its dictator Nursultan Nazarbayev, who has ruled the large Asian republic for 23 years by filtering oil revenues into his private bank account and cracking down on dissent.

Why are British businesses allowed be so cosy to such brutal men? Because our head of government, David Cameron, was on the plane with them.

If there are trade deals to be had with an odious regime, Cameron will be there. With his priorities clearly set out, Cameron said:

“I have over 30 British businesses with me. We’re hoping to sign over £700million of deals.”

Amnesty International reports that recently Kazakh protestors, have been “stripped naked, made to lie or crouch on a cold concrete floor, doused with cold water, beaten and kicked by security officers, often to the point of losing consciousness” and that this would happen at “regular intervals in cycles lasting for hours.”

A good job for them that Cameron was there to defend their rights?

Not so. Nothing shows David Cameron to be a hypocrite on human rights, freedom and democracy quite as well as looking at his passport.

In 1989, while Nelson Mandela was still imprisoned on Robben Island, a 23-year-old David Cameron took an all-expenses-paid trip to South Africa funded by a firm that lobbied against sanctions. This was when Cameron learned his politics from Thatcher’s government, who sold weapons to the murderous General Suharto of Indonesia and even wasted £1bn propping up Saddam Hussein in Iraq.

The morality of Conservative foreign policy has not shifted with the return of Thatcherism in the form of Cameron himself. Shortly before intervening in Libya, Cameron was caught on a plane full of arms dealers desperate to sell their wares to Colonel Gaddafi.

Whilst the Libyan intervention might be justifiable on humanitarian grounds, Cameron’s loyalties before it were plain to see: to the corporations who keep him in their pocket. By revoking the export licenses to Libya after the uprising started, Cameron was admitting Britain had been in the wrong arming the regime in the first place.

The man is nothing if not consistent. Arabs who took to the streets demanding democratic reforms in Egypt and Bahrain were met with British tear gas, probably secured on one of Cameron’s many arms dealing trips around the Gulf. These included “CS hand grenades, demolition charges, smoke canisters and thunderflashes”.

This trail of guns and gold that Cameron has left in the Gulf’s sand is justified as a necessary sacrifice to be offered at the altar of ‘British trade interests’, a handy catch-all which neatly fails to mention there are moral limits to what markets can sell. If divestment and boycott of South Africa to end apartheid trumped British trade interests in the 1980s, then the principle still applies now, although it is clear David Cameron was not convinced of it back then either.

From South Africa, to the Gulf and now to Kazakhstan, Cameron’s allegiance has been to profit, not people. As a free-market ideologue leading a Thatcherite party, David Cameron is not inclined to accept that regulation is often needed to temper the market, including bans on arms sales to certain regimes.

There is clearly a need for a re-think. By linking future trade deals to improvements in human rights, Britain can have a genuinely progressive foreign policy. The current arms free-for-all is an obstacle to democracy.

Nor does it aid British workers. Only 0.2 per cent of jobs in the arms industry itself are dependent on exports, and the industry enjoys a £700m state subsidy that could create far more jobs in a socially useful sector.

When Cameron is signing trade deals with foreign dictatorships it should be in exchange for guarantees of human rights, and when those deals are signed with some of the most repressive regimes in the world, it should never be for weapons. He should behave as if he were a responsible, progressive prime minister, not a cynical merchant and cipher for special interests.

2 Responses to “Is David Cameron our prime minister, or just a travelling arms merchant?”