Tory MEP Daniel Hannan has a piece in today's Telegraph in which he claims the left has "lost its moral compass on welfare". 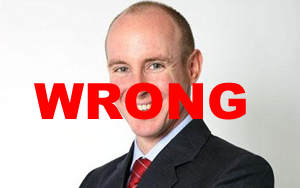 Tory MEP Daniel Hannan has a piece in today’s Telegraph in which he claims the left has “lost its moral compass on welfare”.

I hate that cliched phrase but I’m fairly certain I understand Hannan’s meaning: the left is mistaken in opposing the coalition’s benefit cap. Not only it terms of evidence, but in term of its moral stance on the issue.

It’s a good job that Hannan stresses the moral rather than the evidence-based side of the argument, however, because in term of the latter he falls flat on his big shiny face.

Hannan starts by pointing out that, rather than being cut, the welfare bill will actually rise this year:

By how much, then, do you suppose the welfare budget is being cut? Twenty per cent? Thirty? In fact, it is being slightly increased. The total amount we spend on social protection is already at record levels, and will rise from £240 billion in 2012 to £255 billion in 2013. To give you an idea of how much that sum is, it more than soaks up all the revenue from income tax, council tax and business rates combined…the manic growth of the past decade is being curbed. Ponder the truly eye-popping fact that, during the lifetime of the Labour government, welfare spending rose by 60 per cent during an economic boom.

True of course. The welfare bill has been rising and is forecast to rise still further. But this is mainly due to spending on pensions and tax credits: one for retired people and the other for people who already have jobs. See the first graph: 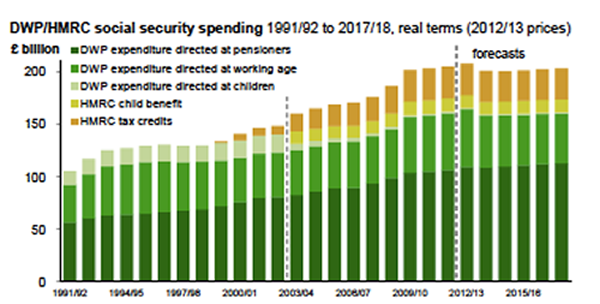 This second graph breaks things down further. One can see here that housing benefit also increased substantially over the course of the last 10 years. A report out today tells you why (clue: many people are now spending 40 per cent of their income on rent). 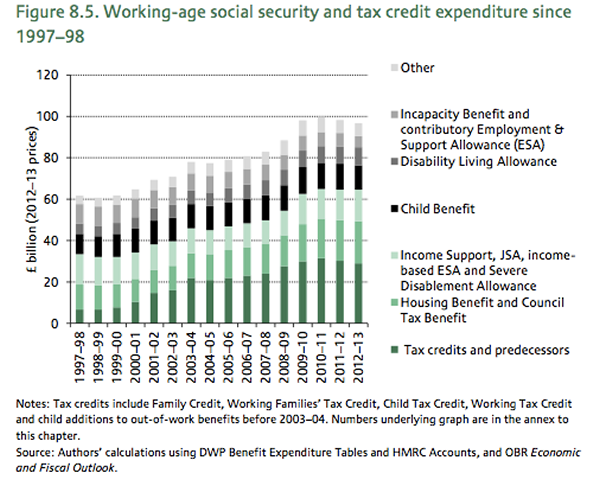 So, then, the bars in the graph showing growth are in the areas of pension costs and tax credits – not out of work benefits. The problem is not an army of Mick Philpotts, but an aging population and a low pay economy. Going after benefit claimants will do very little to “curb” that.

Despite the shrillness of the professionally outraged — the lobby groups, the Guardian columnists, the bishops — public opinion remains solidly behind the former Tory leader. Or, rather, ahead of him.

Popularity also isn’t a particularly useful indicator of the goodness of a policy; the mass is often of lower intelligence than its constituent parts.

Once more back to Hannan:

The massive hikes in welfare spending under the last government had the paradoxical effect of widening the gap between rich and poor, because they made welfare more attractive than work.

This is just demonstrably false.

According to the  Institute for Fiscal Studies (IFS), “direct tax and benefit changes made by the previous Conservative governments acted to increase income inequality, whereas those made by since 1997-98 have benefitted the poor by more than the rich”.

As mentioned above, there was a substantial increase in in-work benefits under Labour which is to be regretted. However this has very little to do with a life on benefits being more attractive than work, but is related to poverty pay and massively increasing rents – something about which Hannan, a self-confessed libertarian, has very little to say.

As I wrote earlier, making work pay by cutting benefits is a bit like snatching away a homeless person’s cardbox box and claiming that in the process you’ve made mortgages more affordable for everyone else. In other words, it’s a non-sequitur.

Back to Hannan one last time and then we’ll leave it. Hannan continues:

Look at the situation IDS inherited: households with three generations of unemployment, defeated, demoralised and resentful.

This repeats a claim made by IDS; and it is a complete fiction. Not a single case has been found of three generations that have never worked. According to the CMPO thinktank, less than 0.1 per cent of households have two generations where no one has ever worked.

In sum, the government’s favourite columnists appear to be as badly informed about benefits as the Secretary for Work and Pensions himself.

5 Responses to “Daniel Hannan: wrong about everything on the benefit cap”