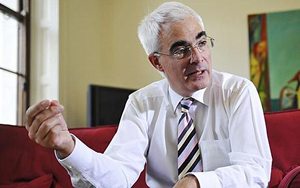 Amid a background of criticism about the direction of the pro-union campaign so far, not least by this website, Alistair Darling yesterday kicked off a summer grassroots campaign with a lecture at Glasgow University.

Calling for Scots to make a “positive” choice to remain within the UK, Darling declared:

“In my view, the onus is on those who want to break up the union to explain why, and why going-it-alone would be better for Scotland.

But there is also an obligation on those of us who support the UK to explain the positive, principled case for staying together, because we want Scots to make a positive choice to remain part of the UK, and not merely to reject the risks and uncertainties of independence.”

Highlighting key issues at stake such as jobs, security, the economy, defence, public services and pensions, he said that “the arguments for staying in the United Kingdom to protect and secure these interests are compelling.”

Darling’s speech came following reports that he personally intervened to quash reports that the UK government would consider making the Faslane naval base part of UK sovereign territory, home to the UK’s nuclear submarines, in the event of Scotland voting for independence.

Amid reports that the former chancellor had personally telephoned Downing Street to outline his concerns at the news which, he felt, would threaten to undermine the content of his Glasgow speech, Darling told reporters after the speech:

“It was a row that quickly surfaced and equally quickly it was sunk. It was a frankly ridiculous proposal to suggest we could possibly designate part of Scotland as different from the rest. I am glad the UK government has hit it hard on the head – that’s exactly what it deserved.

“Any normal person looking at it for more than 10 seconds would come to the view that this was something that should just go straight into the bucket.”

Meanwhile, first minister Alex Salmond will today start a summer series of speeches by attacking what he describes as the Better Together Campaign’s “scare stories”.

Speaking at the Nigg Energy Park on the Cromarty in Firth he is expected to say that the No campaign has been “caught out big time in the nature of their arguments”:

“They claimed that mobile phone charges would go up in an independent Scotland the day before the European Commission set about abolishing roaming charges across Europe.

“They said that the UK’s triple-A status was crucial to Scotland and then proceeded to lose it for the UK.

“They said that UK embassies would no longer promote whisky, oblivious to the fact that they already charge for such receptions.

“All of this nonsense and much, much more is wrapped up in what the Better Together campaign themselves describe as ‘Project Fear’ – their confidence that they can scare people out of voting for independence.”