Rather than making society’s most vulnerable members carry the can, true 'austerity' would require those at the top to bear the much greater burden, in order to bring down increasingly obscene levels of unequal wealth. 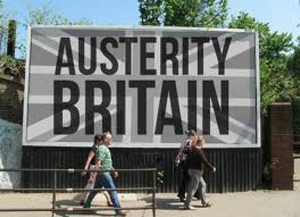 Simon Ravenscroft is a PhD student at the University of Cambridge, working on the social theory of Ivan Illich

Under the coalition government, ‘austerity’ has become a by-word for a set of policies combining swingeing cuts to benefits and public services, as well as tax rises for the majority, with tax cuts for corporations and some of the richest in society.

It is a stunning ideological sleight of hand for the coalition to have been able to combine these various measures so openly without more people kicking up a fuss. They have managed to pass them off, not as the product of neoliberal dogma (which they are), but as the result of cool economic pragmatism and market-based realism (which they are not: witness the relatively different response in Washington, for instance).

Sadly, the paucity of the reply from a political left still in rehab after the New Labour years has only served to make this wool-pulling exercise a much easier task than it should have been.

Here I want to contrast ‘austerity’ as it’s currently understood in our public discourse with a more traditional definition, proposed by the late radical social theorist, Ivan Illich. Illich felt that much of the inertia of modern political life, our inability to bring about positive social change, was because of the way our imaginations were stifled by the guiding assumptions of our dominant institutions and discourses.

Maybe by examining his alternative definition of ‘austerity’, we might in some small way be able to break out of this imaginative ghetto to envisage a different kind of ‘austerity agenda’ that changes the terms of debate from those currently in play.

In his book Tools For Conviviality, published in 1973, Illich acknowledges that in modern speech, ‘austerity’ has taken on a bitter meaning. Drawing on Aristotle and Aquinas, however, he points out that traditionally ‘austerity’ was understood very differently: as a relational virtue which priorities the common good, the foundation of friendship and social harmony.

For Aquinas, he says, pursuing austerity as a virtue did not mean foregoing all enjoyments, but only those that are destructive of ‘personal relatedness’. In other words, if austerity is to be virtuous, it is because it will stop us from becoming alienated from one another, because it will help us to live better together as a community that prioritises common over individual goods.

Contrast this picture with that that has developed under the coalition government. Despite claims that we are ‘all in it together’, austerity has become an excuse to drive a wedge between rich and poor, employed and unemployed, the young and the old, the able and the disabled.

We have been told that because we are in an age of austerity, it is now high time to cut away those benefit-seeking scroungers on the edges of society that are dragging us all down, guilty of a ‘culture of entitlement’. At the same time, we are told that it is necessary to cut taxes for the richest because they’re the ‘drivers of growth’, and will pull us all up with them.

In short, we have allowed a ruling elite to tell us that this ‘culture of entitlement’ is at the bottom of society, and not with the wealth-inheriting, Eton-going career politicians at the top (at least Thatcher, by contrast, was state-schooled), or with the casino-banking fat cats in the City, who were handed billions in bailout money by the state just so they wouldn’t take us all down with them when their stock market fruit machines finally stopped paying out.

Buying into this lie, we let the need for austerity become an excuse to target the most vulnerable in our society.

If, however, following Illich and Aquinas, we prioritised social solidarity in constructing an austerity agenda more faithful to the traditional meaning of that word, how would things look different?

It is now well known that one of the most destructive trends for a healthy society is growing levels of inequality (see Wilkinson and Pickett’s The Spirit Level, for instance). If we were seeking to build a stronger national community, and understood ‘austerity’ as towards that end, this should be the first priority. Rather than making society’s most vulnerable members carry the can, true ‘austerity’ would require those at the top to bear the much greater burden, in order to bring down increasingly obscene levels of unequal wealth.

“Oh, but this will impact on growth”, they say. Well, first, under the current set of policies: what growth?. And second, maybe growth that only benefits a minority at the top of society is precisely one of those ‘enjoyments’ that virtuous austerity would call us to forgo in order to build a better community. Economic growth that only deepens existing levels of inequality, further enriching the wealthy at the expense of the poor, is of no social benefit whatsoever.

Now is the time for those on the left to stand up and be counted on this question of austerity: to imagine the possibility that, defined differently, austerity could – nay must – be for the benefit of society as a whole.

Such a vision would refuse to continue vilifying the poorest and most vulnerable in society, and instead demand that those elites in business and government who use their power to perpetuate chronic levels of inequality, to the detriment of the social body, should make the greater sacrifice.

Perhaps then ‘austerity’ could be restored to its original meaning, as a virtue that works for, and not against, the common good.