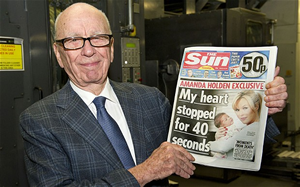 This week the Press Gazette published the results of the National Readership Survey. I have used these results – for both print and online – to draw up tables with readerships and information about owners and political orientation. Almost 78 per cent of our press is owned by a handful of mostly foreign-based billionaires.

Our newspapers like to paint their own role as heroic – they are the brave defenders of democracy who hold our elected representatives to account. Watergate is the archetype of this kind of journalism and it does occur now and again in the UK but it is rare.

Too often, far from protecting our democracy, our papers subvert it. In his Inquiry, Lord Leveson quoted some lines from Tom Stoppard’s Night and Day. Milne: “No matter how imperfect things are, if you’ve got a free press everything is correctable, and without it everything is concealable.” Ruth: “I’m with you on the free press. It’s the newspapers I can’t stand.”

In a free press, the nature of the newspapers matter very much.

The nature of a paper is set by its owner. Press barons wield far more power and influence than all but a very few MPs and have, unsurprisingly, used it to further their own interests.

Since 2010, the barons have pushed the highly contentious argument that there is no alternative to austerity (for other people, not for them or those close to them), and have largely ignored the stories which historians will doubtless note – the widening social divisions and the swelling numbers at food banks, the 21st century’s soup kitchens.

Newspapers exercise power and influence in a number of ways. It is not just that they have a megaphone which lets them dominate the public debate. They also have privileged access to politicians. And one of their most powerful forms of influence is the ability to effectively set the political agenda for the other media and more widely, in parliament, the workplace, the kitchen and the pub.

In the terms of political theory, the press barons impose the elite’s cultural hegemony. As Martin Kettle has argued, the answer to the old 1970’s question – ‘Who governs Britain?’ – is now, in important respects, the press barons. The most recent example of their power – and arrogance – is how they have contemptuously ignored the Leveson Inquiry findings and the subsequent decision of the elected House of Commons.

Newspapers put great store by the concept of editorial independence. Sometimes, it is a reality. The Lebedevs, for example, own papers – the Independent and the Evening Standard – which take markedly different political stances.

Too often, however, editorial independence is a sham. Proprietors choose editors who they know share their views. Editors know well what is expected of them without the need for a proprietor to actively interfere.

Rupert Murdoch’s candour at the Leveson Inquiry was revealing. He said that if someone wanted to know his opinion on a subject they should just read the leader in the Sun.

Over a quarter (27.3 per cent) of the press is owned by Lord Rothermere and 24.9 per cent by Rupert Murdoch  – between them these two men have over 50 per cent of the printed press.

Over three quarters (77.8 per cent) of the press is owned by a handful of billionaires. There are only 88 billionaires among the 63 million people in the UK and most of the barons do not even live in the UK.

I am no fan of Michael Gove’s fact-based curriculum, but it is true that knowing certain facts is key to understanding. All students of British politics need to know who owns our press.