Is Israel uniquely bad, or has hypocrisy towards the Jewish state become so widely accepted among some progressives that even an eminent scholar like Hawking is susceptible to hypocritical and lazy double standards? 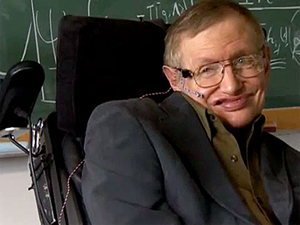 After a great deal of confusing reports, it was confirmed yesterday that physicist and cosmologist Stephen Hawking has pulled out of a conference in Israel next month after being lobbied by pro-Palestinian campaigners.

Initially some had claimed his decision to pull out of the conference was due to ill health, but a statement published by the British Committee for the Universities of Palestine with Hawking’s approval cleared the matter up.

“This is his independent decision to respect the boycott, based upon his knowledge of Palestine, and on the unanimous advice of his own academic contacts there.”

So “respect for the boycott” was a humanitarian gesture, then?

Ok. But why did professor Hawking see fit to visit Iran in 2007 for a conference? As far as I am aware, there was no statement at the time from Hawking refusing to travel to the Islamic Republic out of “respect” for the country’s political dissidents, or until the government stopped executing homosexuals.

A year earlier, in 2006, Stephen Hawking visited China, whose government is responsible for large scale human rights abuses in Tibet. Tibet is, as Human Rights Watch noted several years before his visit, “a place where some of the most visible and egregious human rights violations committed by the Chinese state have occurred”. A 2008 UN report found that the use of torture in Tibet was “widespread” and “routine”.

There’s no need to be an apologist for the Israeli occupation of the West Bank to question where professor Hawking’s moral compass was when he chose to visit these two serial human rights abusers – and ask why it has suddenly appeared when the country in question is Israel.

Is Israel uniquely bad, or has hypocrisy towards the Jewish state become so widely accepted among some progressives that even an eminent scholar like Hawking is susceptible to hypocritical and lazy double standards?

346 Responses to “So why did Stephen Hawking think it was ok to visit Iran and China?”