A minimum wage worker would need to work for 380 hours a week to match the annual salary of someone at the 99th percentile, according to research by the Resolution Foundation. 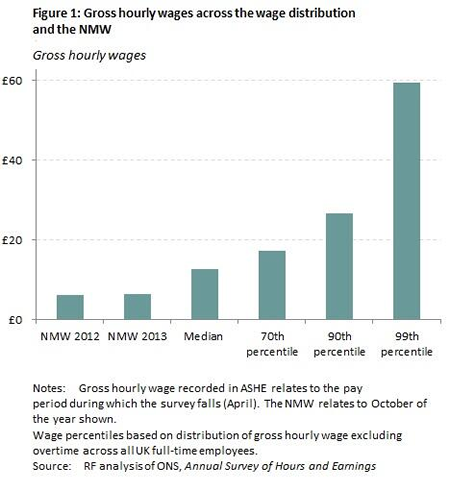 A minimum wage worker would need to work for 380 hours a week to match the annual salary of someone at the 99th percentile, according to research by the Resolution Foundation.

Figure 1 above shows the gross hourly wage at different points in the hourly earnings distribution: the National Minimum Wage from October 2012 and the new rate from October 2013, and at the 50th (the median), 70th, 90th and 99th percentiles. The earnings distribution considered here relates to the gross hourly wage received by full-time employees as recorded in the Annual Survey of Hours and Earnings (ASHE). This measure excludes overtime but includes any bonus payments or incentive pay received in the reference pay period. (Resolution Foundation).

A full-time worker halfway up the earnings scale will receive about twice the wage of a minimum wage worker – just under £13. The employee who is situated 70 per cent up the hourly wage distribution would receive an hourly wage around three times greater than the minimum wage – just over £17.

For a worker at the 99th percentile, the disparities are even considerably larger. In 2012 the p99 gross hourly wage was £59.31. According to the Resolution Foundation, someone on this wage working 40 hours a week for 52 weeks per year would take home around £123,365 per year. After October 2012 the minimum wage rose to £6.19 per hour, equivalent to an annual full-time salary of £12,875. Therefore the p99 worker earns almost 10 times as much per hour as a minimum wage worker.

Earlier this week the government announced that the minimum wage would rise to £6.31 from October 2013. This was the fourth straight annual fall in the real value of the minimum wage once inflation is taken into account.