Opinion on the Left has been divided since the news broke on Tuesday evening that Venezuelan President Hugo Chavez had died of cancer. We asked two of our writers to give their take on the legacy of Hugo Chavez, both for and against. 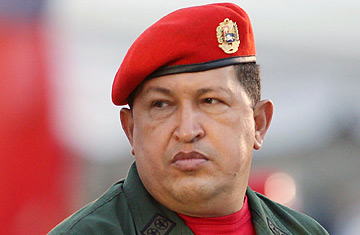 Opinion on the Left has been divided since the news broke on Tuesday evening that Venezuelan President Hugo Chavez had died of cancer.

As we reported yesterday, Hugo Chavez divided opinion. To some he was a tyrannical caudillo, yet for others he represented a push back against American capitalism.

We asked two of our writers to give their take on the legacy of Hugo Chavez, both for and against.

Those seeking to use the death of President Hugo Chavez to bring into question the progressive legacy of his government seem to be struggling to answer two key points.

Firstly, why did the people of Venezuela elect him and his coalition of supporters time and time again in free and fair elections?

And secondly, why did all elements of the left in Latin America from Lula’s PT in Brazil through to Evo Morales of Bolivia hail Hugo Chavez and Venezuela as an inspiration?

The answer is simple. Against those who claimed “history was dead”, Hugo Chavez emerged at the turn of the century as the first elected President to challenge austerity which had devastated Latin America.

The current crisis in Europe pales by comparison with the devastation wrought in Venezuela.

From 1980 there were more than 20 years of falling incomes. GDP per head fell one third. By the mid 1990’s, the crisis meant poverty hit 70 per cent of the population were in poverty, and one in three Venezuelans lived on less than $2 per day.

By the time, Hugo Chavez was first elected in 1998 the majority of Venezuelan’s were poorer than they had been in 1960!

A great achievement of Chavez’s presidency was to reverse this decline and dramatically improve the lives of the overwhelming majority.

From the five million people lifted out of poverty, to the children receiving free school meals, to the 250,000 social houses built last year, the Venezuelan people’s living standards increased immeasurably.

Of course, there is no need to fear democracy when you are delivering for the overwhelming majority. That’s why last October’s presidential election was Venezuela’s 15th set of national elections since Hugo Chavez became President.

That is more elections than took place in the 40 years prior to Hugo Chávez being elected.

To those who imply – but never quite dare say – that Hugo Chavez only won because of fraud or even threats to the opposition, the rebuttal of former US President Jimmy Carter is the most powerful.

He said “the election process in Venezuela is the best in the world” and that Hugo Chavez has always won “fairly and squarely”.

Contrast this with the two decades before Hugo Chavez when thousands of people who protested against austerity were assassinated and disappeared. In 1989 a bloody massacre by state forces led to an estimated 3,000 dead. No such cases occurred in Chavez’s Venezuela.

This rejection of neo-liberalism is in contrast with the failed model of austerity that has sparked the labour movement’s increased interest in the progressive changes underway in Latin America. Venezuela is at the forefront of these changes and this is recognised in Latin America itself.

Lula, the former Brazilian President, best summed this up last year explaining that:

“Progressive governments are changing the face of Latin America. Thanks to them, our continent is developing rapidly, with economic growth, job creation, redistribution of wealth and social inclusion. Today, we are an international reference point for a successful alternative to neoliberalism.”

He added, specifically on Venezuela. “With Chavez’s leadership, the Venezuelan people has made extraordinary gains. The popular classes have never ever been treated with such respect, love and dignity. Those conquests must be preserved and strengthened.”

In short, support for Venezuela and for the wider progressive changes in Latin America are one and the same. All progressives around the world should echo Lula’s words and celebrate the progressive legacy of Hugo Chavez.

He put the idea of 21st Century Socialism – based on democracy and social progress – well and truly on the global political agenda.

Tyrant – Hugo Chavez: the case for the prosecution

Rob Marchant is an activist and former Labour Party manager

It is surprising just how flimsy the evidence for the defence is, so let’s do the cross-examination first.

There are a few things that tend to be said in support of Chávez, mostly disingenuous.

He did but, in the words of Nye Bevan, by “stuffing their mouths with gold”. Despite the claims of his supporters, Chávez was neither a clever Robin Hood redistributer via taxation, in the European style, nor an inspiring political genius.

Point is, gifted an endless supply of oil, you don’t need to be either. Franisco Toro explains the effect brilliantly in The New York Times.

He says: “Petrostates aren’t like normal countries, where governments depend on the people and the companies they tax to ensure a reasonable funding stream.

“Instead, they depend on the black goo they pump out of the ground, and in turn the people and the companies depend on them. The basic balance of power between the state and the individual is upended.

“To the average Venezuelan voter, access to the basics of a decent life means access to his or her little parcel of the petrostate pie.

“That this ends up giving the incumbent carte blanche to pursue policies that are wasteful, corrupt, authoritarian and sporadically downright criminal doesn’t necessarily register.”

Finally, as many have observed, Brazil and Chile have done better overall at lifting people out of poverty, and have experienced booming economies to boot.

2. “He won and maintained power through democracy”.

In fact, there were myriad doubts about the 2012 election, among others, which are discussed at length in this piece. Whatever the brilliance of his hi-tech voting system, elections are surprisingly easy to rig at simple polling station level (cf. Tower Hamlets, London).

If you don’t believe this kind of manipulation is possible, I suggest that you read point 9 of this piece, a chilling extract written by an EU observer at a Venezuela count who notes an irregularity. It makes things very, very clear indeed:

“There are 20 more votes in the machines than voters’ signatures…A little later, as I’m taking some time out in the corridor, my mobile phone rings and a voice I don’t recognise warns me to stop interfering in things that do not concern me.”

3. “Venezuela has a robust free press”

It is robust, but it is certainly not free. Venezuela also has state TV propaganda stations, and has closed down some critical media outlets. Believers in free speech do neither of these things.

And now the prosecution: well, how long have you got?

Economic disaster: This oil-rich country is now an economic basket case, which has devalued its currency five times in nine years.

The scarcity of truth: From this classic “Chavez’ Three Lies” of three things which turned out to be exactly the opposite; to, even in death, the regime apparently pretending he was still conscious for nearly three months, right up until the point when this became untenable on Monday.

Curtailed freedom and human rights: The country is given five out of seven for Freedom House’ Freedom Index, the worst in South America. There are many examples of where it has been necessary to have a Chavista party card to access public services.

Messing around with the constitution: The great democrat has regularly attempted to increase his constitutional power, and succeeded in 2009 in removing term limits. This tinkering is listed in point 8 of this piece.

Friend to monsters: Ahmadinejad, Assad, Lukashenko, Mugabe. The only man alive with a higher dictator-love index is surely his other friend, George Galloway.

Surge in violent crime: Tripling of murder rate under Chávez.

Why does the left persist in its insane, Stockholm-syndrome love for el Chavismo? Apart from the “my enemy’s enemy” maxim which we so often fall prey to, there is another: the insidious racism of low expectations.

These people deserve more. We do not know that much about Capriles but, with a little luck, perhaps he might just be the man to beat the twisted system and gain power. But doing so will be a supreme challenge, and the dice are well loaded against him.