In an event organised last night by the Board of Deputies, Labour leader Ed Miliband was asked by a member of the audience whether he is a Zionist. He replied, “Yes, I consider myself a supporter of Israel.” Ed Miliband wants to make the progressive case for Israel in the spirit of the late David Cairns. The Left should welcome that. 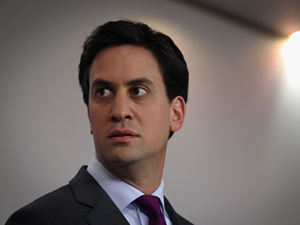 Alan Johnson is the editor of Fathom: For a deeper understanding of Israel and the region

In an event organised last night by the Board of Deputies, Labour leader Ed Miliband was asked by a member of the audience whether he is a Zionist. He replied, “Yes, I consider myself a supporter of Israel.”

Miliband’s journey – into the community, into the faith, and into a closer if still critical relationship to Israel – reached a new way-station last night.

It was certainly a very personal speech. He explained that he felt “huge respect, admiration and indeed a debt…to Israel for the sanctuary it gave my grandmother – Israel gave her comfort.”

But it was also a speech that gave party members a model of how to talk about Israel and Palestine.

First, he was fiercely pro-two state solution, unwilling to see any contradiction in being a friend of Israel and a friend of Palestine. He spoke a language of mutual recognition, mutual compromise and peace.  That remains the beginning of all wisdom on the issue, as LFI rightly point out.

Second, he was scathing of the polarising and counter-productive boycott movement.

He knows that efforts to delegitimise Israel are an obstacle to peace-making and he believes that proposals to break links between UK trade unions and the Israeli Histadrut, for example  – a policy pushed by the PSC and whispered into the ears of some well-meaning trade union leaders by political advisors who are engaged in their own long march through the institutions of the British labour movement – should be rejected.

And he thinks we lefties should be “intolerant of those who questions Israel’s right to exist”.

Third, he adopted the stance of a critical friend. Former Israeli Foreign Minister Tzipi Livni once wrote that “Israel is a confident and strong democracy and [so] is able to withstand and contain criticism” when it is offered “from within the family… out of love”.

That’s what it got last night.

Miliband raised his concerns about aspects of Israeli government policy (in particular, settlements) in the name of Labour’s values, and not in the name of a dangerous campaign to delegitimize Israel. Instead Ed Miliband wants to make the progressive case for Israel in the spirit of the late David Cairns.

That case involves demanding that social justice is not elbowed aside by very real security concerns. It is positive and forward-looking and seeks to make solidarity with the democrats and peace-makers on both sides.

This broad position of progressive and critical friendship with Israel (can we start to call it ‘two-state Zionism’, please?) is in line with exciting work being done by Tal Becker and others at the Shalom Hartman institute to develop the idea of ‘aspirational Zionism’; it is in line with Tzipi Livni’s idea of a ‘new Jewish conversation’, and dare I suggest with my own idea of ‘aspirational advocacy’ set out in the Jewish Chronicle recently.

Writing in the left-wing Israeli newspaper Haaretz, Anshel Pfeffer points out that ‘despite the many faults of the Jewish state, going by the results Zionism is a success story… None of the other nations established over the last 70 years come even close.’

But for Pfeffer, the real meaning of Zionism today is ‘the ongoing challenge of building and maintaining a country and society that conforms to the highest global standards’ taken on by ‘Israelis engaged in the daily struggle of building their society and extricating it from racism, bigotry and hatred.’

Friends of Israel can help in that challenge. Labour’s Ed Miliband just did.