Within just three months the OBR’s forecast for growth in 2013 has been halved. The economy now looks set to be smaller at the time of the next election than it was when the crash hit in 2008 and our recovery remains the slowest in over a century. When the government took office they thought this year would see the economy expand by 2.9 per cent – their own forecasts now show we won’t reach that rate of growth by 2017. The economic case for a new approach has never been stronger. 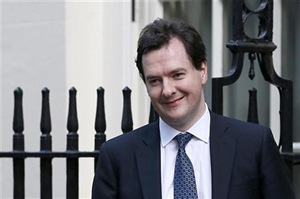 The economic case for a new approach has never been stronger.

Within just three months the OBR’s forecast for growth in 2013 has been halved. The economy now looks set to be smaller at the time of the next election than it was when the crash hit in 2008 and our recovery remains the slowest in over a century.

When the government took office they thought this year would see the economy expand by 2.9 per cent – their own forecasts now show we won’t reach that rate of growth by 2017.

The chancellor is also failing in his own terms.

Despite happily claiming that the deficit is now down by a third the figures reveal a far less positive picture. When one-off factors are excluded it is clear for the next two years the deficit will fail to fall. The £100m decrease between this financial year and the next is negligible, and can only be claimed as a result of a £3.4bn departmental under-spend being rolled over.

The far bigger issue here is that slower than expected growth means that, compared to the December forecast alone, tax receipts will be down by around £8bn and social security spending up by £500m.

Yet despite a stagnating economy, and stalled progress on the deficit, the chancellor is ploughing on regardless. There was reference of the need to boost capital budgets – but the only new spending announced won’t appear until 2015-16. At £3bn a year it will have a minimal impact on growth, and given capital budgets are already down by over £20bn, and will have fallen even further by the time the new money kicks in.

It will be too little too late.

At the same time further cuts lie ahead. The spending review is now set to see another £11.5bn wiped off Departmental Budgets in 2015/16 and will include details on a proposed cap on Annual Managed Expenditure which could have a significant impact on welfare budgets.

Despite professing support for automatic stabilisers the chancellor seems set to cut them back further.

There was a little help on living standards with a further increase in the personal allowance.  But TUC analysis has shown that these changes bring greater benefits to those who are already better off, and that across the income distribution everyone loses more from the 2011 VAT rise than they gain from the personal allowance being increased.

Rather than the chancellor’s tinkering the big story here remains the ongoing real wage squeeze, with employees set for a further 0.7 per cent real pay cut in 2013 and wage packets that barely grow at all the year after.

Our analysis has already shown that the average household will be £1,200 worse off a year by 2015 than would have been the case without the chancellor’s interventions – after today’s figures family budgets are set to feel an even greater squeeze. Public sector workers are set for even more pain – after targeting jobs, basic pay and pensions the government now appears intent on moving to reduce progression payments.

In other news yesterday morning, youth unemployment started to rise again – heading back up towards one million. We still have no idea how well the government’s flagship Youth Contract scheme is doing at helping these young people into jobs, but the lack of information suggests it’s failing.

The long-lasting economic and social damage that youth unemployment can bring mean that investment here should have been a top priority.

There are a few changes to welcome. Providing the ceramics industry with support with energy costs is a positive step, as is the government’s partial acceptance of the Heseltine Review. Increased support with childcare for some parents claiming Universal Credit will make real difference, albeit not for several years.

It’s hard to argue against the new employment allowance, but this scheme will be funded with the proceeds of the employee national insurance contributions which will result from the end of contracting out (a measures which accompanies moves towards a single tier state pension). The lack of ring-fencing for the higher employer contributions also means this policy will bring risks leaving further holes in public service budgets in the years ahead.

This could potentially cost the NHS, for example, around £1bn a year.

Overall this a Budget that will do nothing, as the OBR say, for growth.

The stimulus we desperately need, and that voices from across the political spectrum have been calling for, failed to emerge. Over 2.5 million people remain out of work, real wages keep falling and borrowing isn’t even going down. The chancellor’s plan has failed and we are all paying the price.