This weekend two first ministers went head to head with their competing views on the future of the Union. 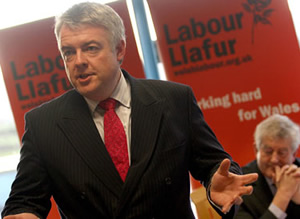 This weekend two first ministers went head to head with their competing views on the future of the Union.

Speaking to the SNP Spring Conference in Inverness on Saturday, Alex Salmond had a clear strategy – by attacking the Iraq war, nuclear weapons and the bedroom tax amongst other things, he told those gathered that independence provided the best opportunity for Scotland to break itself loose from Westminster’s unpopular policies.

“Devolution”, he argued, “can only take Scotland so far.”

While Salmond’s comments were not new, less reported but equally significant wereremarks made on Saturday to the Welsh Labour Conference in Llandudno by its first minister Carwyn Jones.

His message? A Labour administration is best positioned and able to blunt some of the most difficult and damaging policies coming down the line from Westminster within the framework of devolution rather than independence.

Calling for changes to the devolution settlement to give Wales a stronger voice, Jones told the audience:

“Today, we continue on the path of devolution. We need to see the first part of the Silk Commission’s work implemented, so that Welsh Labour has the tools to do the job on behalf of our people. We’ll await now the results of Part two of Silk – but I have to tell you conference, devolution can’t sit still. The present settlement is unclear and needs to be changed.”

Turning his attention to Westminster, he continued:

“We don’t believe in independence because we know – and most people agree – that it would be bad for Wales.  It’s because of our proud Welshness that we oppose independence.  We know that what’s important is the ability to recognise what’s bad for your nation. That’s what sets us apart.

“Let me be clear. Wales is not a second class Scotland. Welsh Labour is not more lowly than the SNP, the DUP or Sinn Fein. Devolution must develop and the people of Wales deserve the same respect as those of Scotland and Northern Ireland.

“We stand for a strong Wales, as part of a strong UK. That’s what our people believe in, and that’s where we, as a Party stand too!”

But his message went further, telling delegates that they needed to redouble their efforts to ensure that Welsh Labour is able to represent all strands of opinion across all four corners of the country rather than being a simple repository for discontent with Westminster. He explained:

“We need to reach out way beyond our recognised core vote.

“To those Welsh speaking communities in various parts of Wales, who fear for the future of their language and of their culture.

“To those people in the North West and West who feel let down by Plaid Cymru because as a party, all they seem interested in is protest and gesture politics, not serious government.

“To those people across Powys – in places like Newtown, Welshpool and Llandrindod Wells, who voted Lib Dem in the past simply to keep the Tories out.

“Then they woke up in 2010 to discover the Lib Dems were just like the Tories after all!

Warm words but ones that may prove far more challenging than anticipated.

The Western Mail’s chief reporter Martin Shipton has detailed at length the tensions now being felt within the Welsh Parliamentary Labour Party in Westminster. MPs were, the paper reports, angered by the Welsh government’s calls for policing powers to be devolved to Cardiff.

“For some”, Shipton wrote, “it was a harking back to earlier rows over the scope of devolution, with objections in principle to the ceding of more power to the Assembly.”

“For more, however, the affront came from Mr Jones’ failure to consult them. There are even MPs and other prominent party members who are signed up to the devolution project who take the view that failing to square his policing plan with them was counter-productive and ultimately foolish.

Any future chance of getting policing powers devolved to Wales will rely on the support of those who have been offended, or possibly their successors.”

Meanwhile, Shipton notes that a number of Welsh Labour MPs are now despairing over the state of public services in Wales. He explains:

“Speak privately to most Welsh Labour MPs and they will tell you how they are regularly approached at their surgeries or by letter about public service failures. Whether it be lengthy waits for hospital treatment, failures of the ambulance service or shortcomings in school performance, the MPs have plenty of anecdotes to tell.

Again, there are doubtless those who enjoy engaging in schadenfreude about a project they were never wildly enthusiastic about, but for others there are inescapable lessons that need to be learnt by Mr Jones and his colleagues.”

Labour may be in power in Cardiff but the reality of government is now biting hard. Tough decisions need to be made faced with the realities of budget cuts from George Osborne.

It is vital, however, for the future of the Union that Carwyn Jones and his ministers are able to prove that devolution, rather than independence, really can be seen and felt  to be  the best model to stand up for the nations.