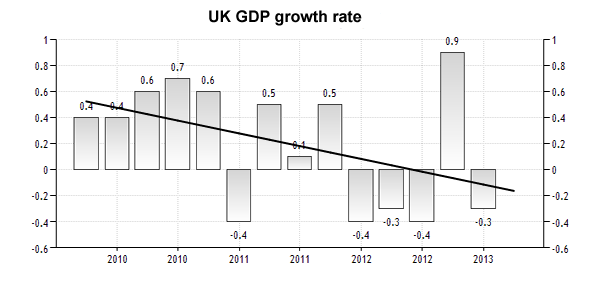 The Bank of England is expected to downgrade its growth forecasts today while warning of more financial pain to come.

As the graph shows, the growth trend in the UK economy has been downward since around the third quarter of 2010 – coincidentally, about the time George Osborne set out the coalition’s spending plans (20th October 2010), in the process ignoring the historical evidence.

Nor can Osborne plead ignorance. He was warned what would happen. He was warned repeatedly. One of those who warned him was shadow chancellor Ed Balls.

“We have a chancellor who believes that he can slash public spending, raise VAT and cut benefits – he can take billions out of the economy and billions more out of people’s pockets, he can directly cut thousands of public sector jobs and private sector contracts, and none of this will have any impact on unemployment or growth.

Against all the evidence, both contemporary and historical, he argues the private sector will somehow rush to fill the void left by government and consumer spending, and become the driver of jobs and growth.

This is ‘growth-denial’ on a grand scale.”

4 Responses to “The coalition is in ‘growth denial’”