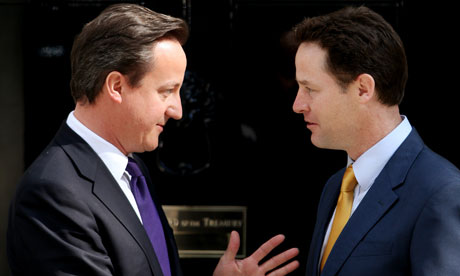 This afternoon saw a reaffirmation of coalition vows from the Conservatives and Lib Dems, along with a host of statements of values, all outlined in their ‘mid-term report’.

Inevitably, Labour has retorted with a document of their own outlining the ways in which they believe the coalition to have failed.

Differences between government and opposition appear stark when looking at certain areas; one such area is the much feted deficit. In the government’s document they outline the section by discussing the debt left to them by the previous Labour government and making hay about their having reduced the deficit by a quarter.

Labour counter this with their assertion that borrowing under the Tories (and they make it clear that the government is a Tory one in their eyes) has gone up by 10%.

On jobs and welfare, there is, unsurprisingly, disparity in the views on display; Labour accuses the government’s work programme of only helping two in a hundred find employment. Meanwhile, in the mid-term report, the same work programme is hailed as a success and as the most ambitious ever seen in Britain.

On schools, the picture is much the same. The government trumpet their controversial ‘free school’ system, saying there are 102 to open this year. Labour instead lambastes the government for their use of free schools saying that they are failing and being propped up by “millions” and that the Department for Education is not saying how many proposals there are.

Between these two documents we are left with a picture not any different to that before the mid-term report. The government spent 52 pages discussing what they have done and why it is right that they carry on and Labour spent 17 pages criticising government policies; this article only presents a flavour of the disagreements between the two documents, but it is reasonably clear from these example that there have been no large developments or surprises in party lines, coalition balances or policy.

What it does demonstrate though is a milestone that many though that the coalition may not reach and that Labour are dialing up the rhetoric ready for the long pre-election slog with their slogan; “Out of touch. Unfair. Incompetent”.

4 Responses to “The mid-term report, and the report on that report”