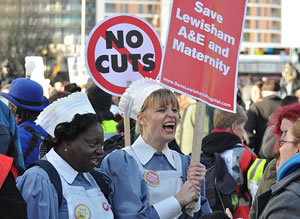 • Health secretary Jeremy Hunt gave his long-awaited statement on the future of Lewisham Hospital this morning, announcing a limited A&E service would remain (with capacity reduced by 75%), and the South London Healthcare NHS Trust would be wound up by October.

On Left Foot Forward over the past few months, we have made the case for the retention of Lewisham’s A&E and maternity units: see here for a rundown of just how unfair, dangerous and nonsensical the proposals are; watch Lewisham’s MPs Dame Joan Ruddock and Heidi Alexander put the case directly to the government in Parliament here; and read about the powerful local campaign here, here and here.

We will have more analysis of today’s announcements and what it means for the campaign from Jos Bell later on Left Foot Forward, and there’s more breaking reaction on Twitter at #SaveLewishamHospital.

Against the backdrop of a looming triple-dip, Miliband attacked David Cameron and George Osborne for their failures on growth, borrowing and debt, while slashing public services, a strategy that was “hurting but not working”, resulting in “the slowest recovery for a hundred years”. Watch it here and see here for more on those GDP stats.

The gravity of the economic morass was underlined by a new report from the Work Foundation this week, that showed UK youth unemployment was the third worst in the OECD – better only than Greece and Spain – and had risen the fastest of any G8 nation since the start of the recession. See our report here for more.

• Another week, another heap of bad news for Alex Salmond and the SNP.

Yesterday, the Electoral Commission ruled Salmond’s proposed referendum question was biased – a point Left Foot Forward made over a year ago when it was first announced. In their findings, the EC said: “People told us that they felt the words ‘Do you agree’ could lead voters towards voting ‘yes’.” The recommended new question is: “Should Scotland be an independent country? Yes/No” – slightly fairer than the initial “Do you agree that Scotland should be an independent country? Yes/No”.

At the weekend, meanwhile, the SNP’s EU membership position unravelled further, with Salmond dispatching his deputy Nicola Sturgeon to try and spin her way out of the latest remarks from the President of the European Commission. Read our report here for more.

Alliance Party leader and Northern Ireland justice minister, David Ford MLA, who this week published the party’s “Shared Future” proposals to bring about a “fair society… for everyone”. The divisions in Northern Ireland, he said, “bring significant human, social, economic and financial costs”. Read our report here for more.

Regressive of the Week:

The Respect Party’s George Galloway MP, slapped down by the prime minister at PMQs this week after his attack on the western mission in Mali against violent Islamist extremists, Cameron saying:

“Wherever there is a brutal Arab dictator in the world, he will have the support of the honourable gentleman.”

Watch it here, and for more on the poisonous influence of Galloway, see here, here, here, and here. Galloway responded to his PMQ’s humiliation by writing a letter to Cameron whining about the prime minister’s “vulgar abuse” and claiming he does not support “any Arab dictatorship”. Read our reply to Galloway here.

Demos’s new report, “The Power of Prepaid“, which examines the success of prepaid cards as a way of delivering direct payments from central and local government, highlighting the prospective benefits it could have for the most vulnerable in society entering in to the non-cash world. Read our report here for more.