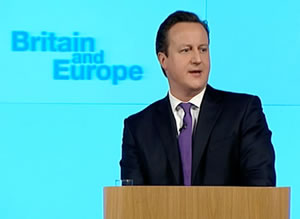 • David Cameron delivered his long-awaited speech on Europe this week, pledging an in/out referendum in 2018 if re-elected – delighting his backbenchers and the right-wing press but displeasing business, the opposition and our European allies.

The reaction from Europe, in particular, was scathing. As Left Foot Forward reported yesterday, he was called a “scaredy-cat” and “dangerous”, told he was living in an “ideological fantasy world” with his idea of a “28-speed Europe” and warned Britain would be “weakened” – with the German Ambassador “playing with his pen” rather than clapping the PM, and former French prime minister Laurent Fabius vowing to “roll out the red carpet” if the UK decided to leave. As Tony Blair said, Cameron’s strategy was akin to holding a gun to his head and saying ‘if you don’t do what I want I’ll blow my brains out’.

Writing on Left Foot Forward, former Green Party leader Caroline Lucas said, if there is to be a referendum, pro-Europeans must not be afraid to make the case for EU membership; indeed, judging by the characters in the ‘no’ camp, there really shouldn’t be anything to fear – as a Tory blogger wrote today:

“Who will speak for ‘Outers’? Seriously, who will answer the phone for the ‘Out’ campaign? While the ‘Inners’ will be disciplined, coordinated and united in their quest, the ‘Outers’ consist of a ragbag of ‘swivel-eyed nutters’, ‘right-wing xenophobes’, ‘eccentric little-Englanders’, not to mention the ‘fruitcakes, loonies and closet racists’. And (here’s the important point) most of them simply can’t stand the sight of each other. There’s backbiting, distrust and an entire dung-heap of mutual loathing.”

As Lucas says, it cannot just be about waiting for the sceptics to in-fight, look ridiculous and implode, the positive case for Europe has to be made – on jobs, fighting crime, rights, the environment, the economy… on every major policy area, we’re better off in – now’s the time to make the argument and win it.

• The latest GDP figures are out on Friday morning – coming off the back of yesterday’s good labour market stats and Tuesday’s poor borrowing figures.

However, it is on debt that the government is most under fire this week, with shadow chief secretary to the Treasury Rachel Reeves writing to the UK Statistics Authority over claims from David Cameron in a Tory party political broadcast last night that “we are paying down Britain’s debts”. Labour say it appears to be an attempt to “deliberately mislead the public”, with the latest figures showing the national debt is not being paid down, but is actually risisng.

• There was more bad news for Alex Salmond today, with support for independence slumping to its lowest level since the establishment of a Scottish Parliament in 1999.

As Left Foot Forward reported this morning, only 23% of people in Scotland now think it should become an independent state – this is equal to the previous low recorded in 2010, and represents a drop of nine points on the 2011 figure of 32%. The latest poll findings also suggest fewer Scots are optimistic about the potential consequences of independence than 12 months ago – in 2011, 51% thought independence would give Scotland a stronger voice in the world; that figure now stands at 42%, while the proportion who believe independence would mean people in Scotland would have more pride in their country has also fallen from 67% to 55%.

Read our article here for more, and also on Left Foot Forward this week, shadow Scotland Office minister William Bain has written about the lessons from Canada for Scotland’s constitutional debate, and tomorrow, we’ll have more on the SNP’s increasingly parlous position over an independent Scotland’s future EU membership.

Director of Public Prosecutions Keir Starmer, who this week announced the Crown Prosecution Service will look to quintuple the number of tax evasion cases it prosecutes to 1,500 a year by 2014-15. In 2010, the CPs secured just 200 tax convictions. Read our report here for more.

Regressive of the Week:

Mayor of London Boris Johnson, who played the fool once again by claiming we’re heading for a “mini ice age”. His evidence? Looking out of his window and seeing some snow, a method of predicting the climate dismissed as quackery centuries ago. As Ros Donald and Christian Hunt of The Carbon Brief wrote this week, “a potential future prime minister who is easily led by fringe theories about the basics of climate change” should worry us all. Read their article here.

“Monitoring poverty and social exclusion in Scotland 2013“, by the Joseph Rowntree Foundation, which highlighted a bleak future for unemployment and health across Scotland. Among its headline findings were that, since 2008, the number of under-25s who are unemployed has almost doubled to 90,000, and on health inequalities, it reveals a boy born in the poorest tenth of areas in Scotland is expected to live up to 14 years less than one born in the least deprived tenth; for girls, the difference is eight years.

Read our report here for more.