Any government would be pleased with today’s labour market figures, but it is possible to claim too much for them, writes Richard Exell. 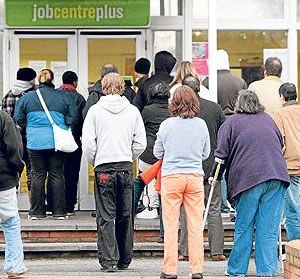 Today’s labour market statistics (pdf) show 90,000 more people in employment in September to November than there had been in June to August; the employment rate was up 0.1 points, to 71.4 per cent.

The unemployment rate was down 0.1, to 7.7 per cent, with the unemployment level down 37,000; the number of people claiming Jobseeker’s Allowance is down 12,100.

These are positive figures and in previous recent posts I have emphasised the fact there is a real increase in employment, as illustrated by the figures for actual weekly hours worked: up 0.8 per cent on the quarter, 2.3 per cent over the past 12 months.

There are some less positive results, however, that may hint this positive trend will go into reverse.

In particular, the number of redundancies rose for the second month running: 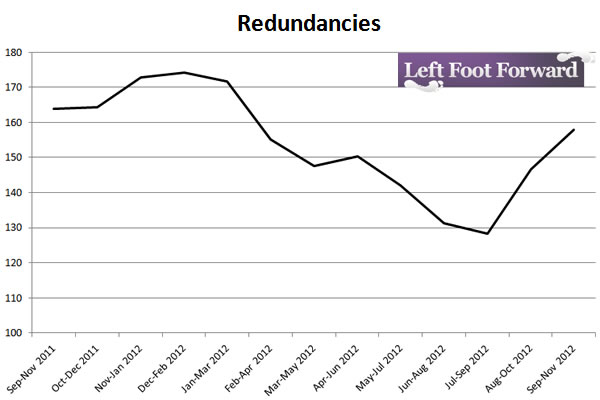 Note this graph does not include the post-Christmas retail redundancies of the past few weeks; nonetheless, the overall figures are very good, and take some explaining, given the stagnation of GDP.

As I indicated at the start of the year, my favoured explanation is what is happening to pay – in the three months to November, average weekly earnings (total pay) for the whole economy were just 1.5 per cent up on the year, down from 1.8 per cent the previous month.

This was well below CPI inflation, 2.7 per cent that month, and half the RPI, which was 3.0 per cent – and the Office for Budget Responsibility expects real earnings to be even worse this year: 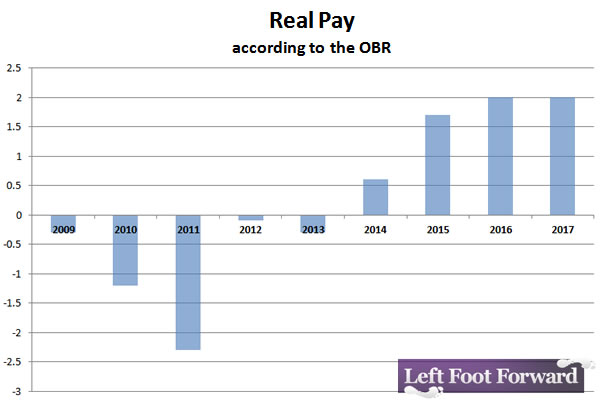 Falling real pay means companies that would otherwise be forced to make workers redundant find it easier to keep them and encourages employers to substitute labour for capital. This is preferable to rising unemployment, but it is not a basis for economic growth.

Average weekly earnings have stagnated since April, which means that, unless there is some improvement, the figures for April 2013 will show the annual increase falling to zero.

The other factor explaining the growth of employment is the expansion of “atypical” employment (including part-time, temporary and self-employment). I don’t want to overstate this, because there is a real growth in full-time employee jobs, accounting for 91 per cent of the employment growth in the latest quarter.

All the same, the 552,000 headline increase in employment over the past 12 months cannot be accepted at face value:

• The expansion of government employment and training programmes accounts for 12 per cent of the increase. (These figures overlap, so don’t add them up.)

At the TUC we have pointed out that, since the start of the recession, self-employment has accounted for most of the increase in employment (in the latest figures, the number of employees has fallen 227,000 since January to March 2008, while the number self-employed has risen 345,000).

Any government would be pleased with today’s figures, but it is possible to claim too much for them.

One Response to “Today’s labour market figures are good, but it is possible to claim too much for them”