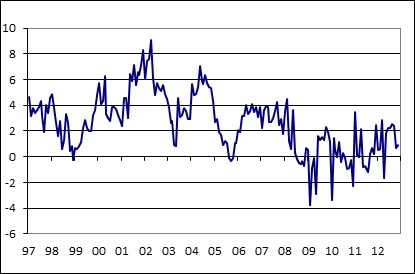 Tony Dolphin is the chief economist at the IPPR and a regular contributor to The Guardian and New Statesman.

During the autumn statement last month, George Osborne claimed that the UK economy was slowly on the mend; however, the latest data indicates the opposite may be true, despite the economic expansion in the third quarter (Q3) of 2012.

It is looking increasingly likely that the UK returned to negative growth in the final quarter of last year. As the public finances continue to worsen, the chancellor was forced to admit that his second target – getting the public sector debt down by 2015-16 – will not be met.

In response to the growing government debt, the three major credit rating agencies have put the UK on negative outlook, threatening its triple A rating. Meanwhile, inflation pressures continue, with CPI at 2.7% – well above the Bank of England target rate of 2%.

This increase in prices without an equivalent rise in earnings has meant that living standards continue to drop. Reacting to weak earnings growth, consumers held back on spending in the pre and post-Christmas shopping period, leading to continued dampened retail sales. There have been only a few silver linings. The labour market continues to improve, and the manufacturing CIPS survey shows a jump in economic activity – its highest level in 15 months.

The OBR, among other bodies, has predicted the UK will likely contract in the last three months of 2012. The flat lining economy, the worsening public finances and the weak global economic outlook further reinforces the need for a clear and bold strategy for growth. The Autumn Statement left much to be desired in this respect, with a strong focus on its austerity programme and not enough in the way of measures to boost growth.

The end of the year was also marked with a series of downgraded GDP growth forecasts, and speculation as to whether the UK will keep its triple A rating in 2013. Overall, consumer and business confidence have taken a hit in response to the seemingly never ending austerity, and a continued Eurozone crisis. In fact, some have suggested the UK may sink into a triple dip recession.

Given the dismal economic performance of 2012 and the absence of a coherent growth strategy, it comes as no surprise many expect more of the same and remain pessimistic for the year ahead. The poor outlook increases the pressure facing the treasury and the Bank of England to revive the economy. The incoming Bank of England governor, Mark Carney, recently stated that under particular circumstances policymakers might consider using altogether new monetary policy tools. In particular, instead of inflation targeting, central banks may consider targeting nominal GDP. This approach would be a significant departure from the Bank’s monetary policy framework, but may provide the much needed stimulus.