Jos Bell updates us on the progress of the Save Lewisham Hospital campaign and attacks the ignorant ideology behind those who wish to close the hospital. 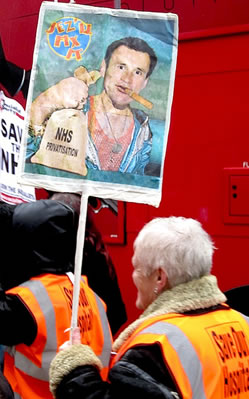 On September 26th, Lewisham Council passed a motion pledging to protect the NHS. Two months later, on the evening of Wednesday, November 28th, three spaces, three places, were taken up with close to a thousand people all focused upon one thing – the Save Lewisham Hospital campaign.

Catford Broadway Theatre – an art deco jewel, which will shortly welcome Baroness Floella Benjamin, in the guise of Cinderella’s fairy godmother, in the up and coming Christmas pantomime; on Lewisham Super-Wednesday, the audience were there to unravel another fairy story, the TSA recommendations for the South London Hospital Trust (currently incorporating Lewisham Hospital in what appears to be an erroneous add-on).

Just four days after the march of the 15,000, several hundred people turned out into the dank November night to protect our historic, shiny and solvent Lewisham Hospital.

Meanwhile, in a model of interconnectivity, next door in the Civic Centre, Lewisham Council was in full session. Councillor Vicky Foxcroft, in her Save Lewisham A&E t-shirt, gave a clue as to a major item on the agenda.

She was there to second the motion from Cllr Alan Hall:

They also called upon the TSA Matthew Kershaw to change his proposals and remove any recommendations which would result in reductions in the services provided to residents of Lewisham by Lewisham Hospital.

And, standing against their own government, the hitherto lacklustre Lib Dems presented their own motion – which was also unanimously carried:

“This council notes its strong opposition to the Trust Special Administrator’s draft recommendations; …recognises the essential service that University Lewisham Hospital’s A&E and Maternity Units provide; acknowledges the dedication of Lewisham Hospital staff; and notes the strength of local public opinion in Lewisham on this issue.”

Back in the plush red theatre seats, row upon row of residents, workers and patients, made their feelings very clear.

The workforce was reeling with shock and trepidation for their patients – as so ably described by consultant John O’Donoghue:

“Is our hospital bankrupt? No!

“Is our hospital failing the community? No!

“We keep dangerously ill people alive – this is unfair and dangerous!”

Carol Brown, a former ICU patient, spoke movingly of her own life-saving care. Others spoke of “only just making it into Lewisham A&E” before collapse. Heidi Alexander MP, whose office is managing the protest petition, spoke clearly and forcibly on the threat.

Representation came from the psychiatric service on the dire impact this would have on the borough’s mental health – and Shirley Franklin of the successful Defend Whittington Hospital Coalition extolled the benefits of working jointly – whilst next door the councillors indeed resolved to work together and “actively campaign with residents to make clear to the Trust Special Administrator (TSA) and the Secretary of State, their opposition to these damaging proposals”.

Dr John Lister of London Health Emergency told us this is the largest campaign he has ever seen, and noted how quickly it had come together. There was predictably a lot of anger about PFI from those who like to generalise – however the later Lewisham deal, which has provided the borough with state of the art facilities, is not the killer.

Queen Elizabeth Hospital (QEH) PFI is the element which needs addressing, including by the TSA ,who should be renegotiating the deal, but (strangely) has so far refused to consider it. Why is it that the greedy contractor’s purse continues to be prioritised over patients?

Also adding the University of Lewisham Hospital Trust should not be drawn into the viability of the QEH and their debt (especially given the TSA’s draft proposals have not undertaken sufficient work into the capacity needs of A&E facilities needed in south-east London), nor have they taken any account of waiting time now or after closures – and also given (as was flagged up in the Broadway meeting) that SEL NHS already warns local GPs existing A&Es are already at capacity.

Meanwhile, on the floor of the House of Commons, Jim Dowd MP (Labour, Lewisham West and Penge), having secured an Adjournment Debate, called it “the dominant issue – for my constituency and a large part of south-east London at the moment”.

“It is not just the proposals themselves that are making people so angry; it is also the devious and underhand way in which they are being enacted.”

Noting that in his written statement in July, the then Secretary of State Lansley (whose successor has just pronounced this will be a roll-out model) said:

“The trust special administrator’s regime is not a day-to-day performance management tool for the NHS or a back-door approach to reconfiguration.”

However, as Jim Dowd observed, that is exactly how it feels and looks in south-east London.

Lewisham council has expressed its collective view the proposed merger of QEH and Lewisham Hospital should be subject to proper consultation and debate, noting with concern there are only three official public consultation meetings in the borough; just as our MP was pointing out on the floor of the House of Commons, Lewisham council sees the appointment of a joint chief executive to both Lewisham Hospital and QEH as premature, which is precisely why so many in Lewisham see this as a sham consultation.

What Jim Dowd referred to as “the intolerable price that the people of Lewisham are being expected to pay in terms of poorer, less accessible and more inconvenient services” was highlighted simultaneously on the stage of the Catford theatre and in the council chamber.

Nonsensical TSA travel estimates regarding travel times “when the roads are free of traffic” were related by Dr John Lister to more laughter than panto-world can produce. So much for an “extra 14 minutes travel time” – it takes an hour or more of travel via at least two trains and a bus from some areas of Lewisham borough to get to QEH.

All material to the life and death of the local population – not just of Lewisham, but of Greenwich and Bexley too.

Back in the Commons, our doughty MP drilled down into the money: £55 million allocated to clearing old buildings and altering a site which the TSA team wants to sell off for £20 million – and where the final development was only completed this year to the cost of £12 million (A&E 2012); Birth Centre addition 2010 – a total cost of only £700k; and the Riverside block (2006 – £70 million) – all hitherto sustainable under their agreed PFI deal with money following patients through the doors.

Bizarrely, the TSA plan leaves only one third of the current hospital site operational – but with largely only rental income from teams using it for pre-booked ops; meanwhile, more funds will need to be spent on the QEH site to being it up to standard. Sustainability out of the window!

“That is almost unbelievable – it does not make any sense whatsoever.”

Of course, the only sense comes through the prism of the inverse logic of destruction so beloved of the current government. Predictably, in response, he only got more nonsense from junior health minister Anna Soubry.

After admitting the borough’s anger is “understandable”, she improvised wildly:

Ummm Anna, here’s the thing – Lewisham Hospital actually was afloat until your friends Lansley and Hunt started their mindless tinkering; it still could be, and indeed, should be.

Medical staff, managers, unions, healthy residents, sick residents, politicians of all varieties and young people – all have one message. Let the people who understand the needs of Lewisham and South East London decide what is best for us and for QEH in any re-configuration.

A resounding “NO!” went up as the Broadway audience were asked whether they had confidence in the TSA Consultation. Each of the hospital’s specialist teams are responding in writing in similar vein (pun very much intended!).

The council is now also questioning legality; over to Jim Dowd on the floor of the Commons again:

“There is a widespread feeling, backed by legal opinions, that the TSA does not have the power under the 2006 Act – and the current Secretary of State confirmed during health questions yesterday that that was the legislation involved – to enforce his recommendations.”

“This back-door reconfiguration at Lewisham is an abuse of process. Will be writing to Hunt soon.”

The following morning, borough resident Nick Ferrari asked for an update for his LBC listeners who are apparently taking a great deal of interest – he enquired when the next meeting would be. The reply? This is one for Mr Kershaw. His team have called their final ‘consultation’ event – in the Calabash Centre, a stone’s throw from Lewisham Hospital – between 6 and 9.00pm on the 4th December – the 55th anniversary of the Lewisham Train Crash, when 90 people died and 173 casualties were rescued by Lewisham NHS medical staff.

Mr Kershaw. Mr Hunt. Lewisham people do not forget. You will be hearing a great deal more from us until you see sense. This is not the way to protect the nation’s health.

In the meantime, we have until 13th December to respond to this life threatening travesty; please sign our petition.