Jos Bell explains why we must to save Lewisham Hospital from being a victim of the coaltion's NHS shake-up. 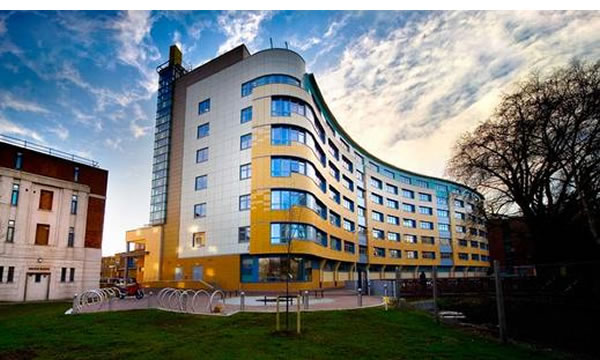 Healing Blue is the colour used in the NHS logo and nursing uniforms and so is the very colour of the Lewisham SOS NHS leaflets, produced last year to alert the local population about the Health and Social Care Bill (now Act) and the grave threat to the NHS, now, just as the leaflets warned, being enacted like Fred Flintstone rolling his concrete wheels over a flock of humming birds.

In the blink of a six-month eye after the passing of the Bill into an Act, the coalition are shockingly taking the Lewisham NHS Trust by the throat in announcing the uniquely contrary closure of the recently re-vamped A&E (as lately seen in tune with Gareth Malone) and the nearly-new state of the art Birth Centre, in order to divert patients (and their accompanying funding) back to the tired facilities of the failed South London Healthcare Trust.

Lewisham Hospital Trust have just disclosed that in their initial statement, they made the offer to take QEH Woolwich under their financially stable wing if the SLHT came to be dismantled – however, it is doubtful they bargained for the additional criteria slung into the mix by a seemingly less than discerning special administrator Kershaw.

Not ‘just’ the closure of A&E and maternity – but also acclaimed paediatric wards, critical care, emergency and complex surgery and pretty much anything requiring more than a sticking plaster.

Of course we know the South London Healthcare Trust has been placed into administration at a time when, aside from £4 billion in reserves, the £1.6 billion George Osborne clawed back last year – ‘taken out’ in line with Andrew Lansley’s no rescue, laissez-faire folly whilst Ali Parsa’s Circle have been given an immediate bailout by Jeremy Hunt to keep up their privatisation haul at Hinchingbrooke, a mere four months after they took it over.

Currently Lewisham Hospital treats an annual footfall of approx 120,000 and the Paediatric A&E another 40,000 – hardly a small number of patients to plonk onto their already overflowing surviving neighbours.

Survival is indeed the word – for given London traffic and travel, there will undoubtedly be avoidable deaths, which would not occur if the local A&E remains open. I for one would no longer be alive had I been asked to travel further afield for emergency treatment.

When the pulse stops – it stops.

The ludicrous recommendation of Andrew Lansley-appointee Kershaw carries not one single clinical or economic credential, so we can therefore deduce it must be a wildly inappropriate attempt to keep the doughnut voters of Woolwich, Sidcup, Orpington and Bexley happy – whilst seemingly patients in long-term Labour Lewisham are to be left to die on the pavement for lack of fast access to necessary facilities.

However, they forget the burden will be shared. Curiously, unlike their colleagues at Lewisham Council (despite many protests from Royal Borough of Greenwich residents and QEH Woolwich staff), Greenwich Council (also Labour-run) has failed to comment and give voice to the obvious risks to the people of all the communities affected. Never let it be said party lines are consistent even where poorly queues are concerned.

A letter circulated to lead GPs by SEL NHS illustrates the reality of the situation:

“This is to notify you that there are currently high levels of attendees at all local A&E departments. It would be appreciated if you would take note of this and for the moment, it would be appreciated if patients could, if at all possible, be maintained in a primary care setting. This situation is being addressed and we will communicate with you again about this tomorrow (Tuesday23rd Oct) morning.

Carelessly, mindlessly, flippantly, the Kershaw proposals leave only one A&E per 750,000.

Not that this issue stops at good quality A&E access alone. Following publication of the full draft document, the worst is revealed: £39million of staff cuts at South London Health Trust; Lewisham A&E becomes an Urgent Care Centre – basically nothing more than a GP surgery with a couple of nurse practitioners, an X-ray machine and quick blood results… Essentially, and vitally, the Kershaw plans mean Lewisham will cease to be an admitting hospital – and buried deep within the TSA document, will ultimately fail to become a Trust.

If Lewisham Hospital is damaged in this way it will also void the compulsory Foundation Trust application because the large drop in patient numbers will badly damage the viability of the whole hospital, especially given it will still be required to pay back the PPI bill of the closed revamped facilities.

Basically, what will be left – aside from the £17million sell off of the former Lewisham Workhouse buildings where Stephen Fry’s ancestors once found themselves – will be snazzy new facilities lucrative to the private sector carrion crows whilst the SLHT PFI paybacks (some of them having been likened to a Wonga deal) infect the remaining healthy elements of the NHS such as Lewisham HT.

Why, people are asking, are these contractors not being asked to share a proportion of the burden – how enforceable are these deals when some of agreed interest rates are part of the problem?

Of course, in the days before the H&SC Act, the Secretary of State would have had a duty of care to ensure all areas of the population have access to decent sustainable NHS services. Now they feel they have a get out clause potentially leaving many thousands without sufficient medical facilities.

With an increasing population and a steeply increasing demand at local surgeries, the site at Woolwich – set at the back end of the Common, definitely not within walking distance from the train stations (particularly if feeling a tad poorly) and with much reduced facilities compared to the Lewisham site, and already struggling to meet local demand – will be overflowing.

The trend is likely to be that Lewisham families will be more likely to find their way to the more accessible and far-better-run Kings-– also increasingly busy and where staff are similarly unimpressed with these foolhardy proposals.

In the meantime, I invite SLHT administrator Matthew Kershaw to do the following:

1. Spend some time in QE Woolwich A&E and ask his relatives to take a trip to see him on public transport via a few random points dotted around Lewisham – not simply an additional 14 minutes as he estimates, but several bus changes for patients from the west of the borough and a train or two plus a bus journey away from the site of Lewisham’s current A&E;

2. Do the sums again to include a patient, GP and population health impact cost assessment;

3. If not, then commit to speaking in person to the first families who suffer unnecessary bereavements as a result of his ‘plan’.

He should also remember that Mr Grant Shapps – or his understudy, led the way in alerting the people of Lewisham (and indeed further afield) as to the intended destruction of vital NHS services – targeting a constituency where male life expectation is only 70.8 and 30 people are chasing every job vacancy.

But hope is at hand. In the midst of the Health and Social Care Act – just as Gloucestershire discovered – there is permission for local people to influence service delivery.

So we now have the Save Lewisham Hospital campaign – which originally started out as Save Lewisham A&E. Already being given a lot of media space (unlike the H&SC Bill), the campaigners, bringing in support from all parties, are holding a march this Saturday at 2pm with a gathering in Ladywell Fields at 3pm.

Following the first public meeting, which overflowed into three lecture rooms and a nearby community building, there is another campaign meeting on November 28th to be held at the Broadway Theatre, Catford – the largest space the team could find!

If you feel even half as strongly about this as the people of Lewisham and the medical staff at all the hospitals affected, please do please sign the petition set up by Heidi Alexander MP (@Heidi_MP) to support Lewisham A&E & Maternity Units.

You can also keep up with the Office of the Special Administrator – after all, he so generously gave 30 days to the consultation period, it would be rude not to make the most of it.