During this tumultuous time for the UMP, French Fascist Marine Le Pen has made noises suggesting a possible political manoeuvre to sweep up more votes. 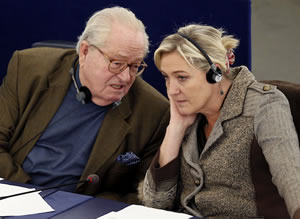 The troubled Union for a Popular Movement (UMP) leadership bid and François Hollande’s popularity slump may have left an open door for Front National and their leader Marine Le Pen to resurge.

Indeed Le Pen recently stated “the Union for a Popular Movement is dead” and has also been making her delight of the UMP crisis clear on social networking sites, as they clearly see an opportunity to become the main rivals to the Socialist party in France.

Le Pen did not win a parliamentary seat – however, her niece Marion Marechal-Le Pen did, becoming the youngest member of the French parliament. MM is said to be attracting younger members to the party.

The recent UMP leadership battle largely had the party of former French president Nicholas Sarkozy divided, and although Jean-François Copé was eventually declared the winner, he only won by 98 votes.

The caveat is that Copé is seen as more right wing than his contender François Fillon. In this sense, if Copé can unite the party again, UMP could actually draw in Front National supporters.

With the next presidential elections being so far away, there may be time for UMP to become a formidable force again. However, if the UMP party fragments because of this crisis, it could create a vacuum for the right wing which Le Pen’s French Fascists would be only too happy to fill.

There is no room for complacency from either UMP or the Socialists who must keep their eye on the ball to ensure a Front National surge does not occur.

3 Responses to “Le Pen on the rise? French Fascists seek to take advantage of UMP’s troubles”