The Chief of the Defence Staff has said there are contingency plans in place for Britain to intervene militarily in Syria in the next few months. 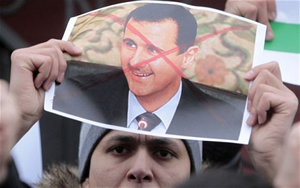 The Chief of the Defence Staff has said there are contingency plans in place for Britain to intervene militarily in Syria in the next few months to prevent a worsening of the humanitarian crisis.

“There is no ultimately military reason why one shouldn’t [intervene] and I know that all these options are quite rightly being examined.

“But we are some way off. The humanitarian situation this winter I think will deteriorate and that may well provoke calls to intervene in a limited way.

“We develop contingency plans to look at all these things. It is my job to make sure these options are continually brushed over to make sure we can deliver them and they’re credible.”

“The main thing we are all focusing on is to contain the crisis so that it doesn’t spill over into countries like Lebanon, Jordan, Turkey. That’s our primary focus but that would also accommodate a humanitarian crisis because we could help deal with that.

“It is certainly something we have got to look at.”

Richards’s remarks come as Syrian opposition groups put their differences aside to agree a new coalition to try to topple the Assad regime.

After four days of wrangling in Qatar, representatives of groups including rebel fighters, veteran dissidents and ethnic and religious minorities agreed to form the coalition supported by Western and Arab backers.

Muslim cleric Ahmed Moaz al Khatib, 52, a Damascus moderate who left Syria three months ago, was elected president of the coalition, with prominent dissident Riad Seif and female opposition figure Suhair al Atassi chosen as his deputies. Mr Seif, who championed the US-backed reform proposals on which the agreement was based, said the group had signed a 12-point agreement to establish the coalition.

In a document seen by journalists, the parties have agreed “to work for the fall of the regime and of all its symbols and pillars”, and ruled out any dialogue with Mr Assad’s government.

They agreed to unify the fighting forces under a supreme military council and to set up a national judicial commission for rebel-held areas. A provisional government would be formed after the coalition “gains international recognition”, and a transitional government after the regime has fallen.

Meanwhile in Syria itself, government jets and helicopters today bombed rebel-held Ras al-Ain – a town just yards from the Turkish border, sending civilians running for their lives into Turkey.

Helicopters also strafed targets near the town, which fell to rebels on Thursday during an advance into Syria’s mixed Arab and Kurdish northeast. There was no word on casualties.

The jet struck within meters (yards) of the border fence that divides Ras al-Ain from the Turkish settlement of Ceylanpinar, sending up plumes of black smoke.

A Reuters reporter in Ceylanpinar said the plane flew right along the border and appeared at one point to have entered Turkish airspace. It was not clear what the bomb struck, but scores of civilians fled the area, scrambling over the fence into Turkey.

Ras al-Ain, 375 miles from Damascus, is home to many of Syria’s million-strong Kurdish minority.

As long as Assad remains in power, expect the bombardment of the rebels, and the crushing of those who dare to oppose him to continue.

One Response to “As Syrian opposition form coalition against Assad, Gen. Richards says UK could intervene”