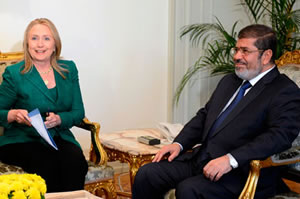 Egypt is braced for a wave of protests after President Mohamed Morsi, riding high and fresh from brokering the Gaza ceasefire, passed a decree giving himself sweeping new powers.

The new powers mean the President’s decisions cannot be revoked by any authority – including the judiciary – and have been denounced as a “coup against legitimacy”, with Mohamed El Baradei warning:

“Morsi today usurped all state powers and appointed himself Egypt’s new pharaoh. A major blow to the revolution that cld have dire consequences.“

Opposition figures including El Baradei, former Arab League Secretary-General Amr Moussa and Hamdeen Sabahi issued a statement late yesterday calling for protests against the decrees, calling for them to be overturned and warning that Mursi’s legitimacy was on the line.

The moves mark the latest push by the Islamist president to wrest power away from a judiciary that the Brotherhood has argued is biased against him. The group said it supported his latest decisions and considers anyone who objects to them as “selling the blood of the martyrs,” the state-run Middle East News Agency said, citing Brotherhood spokesman Mahmoud Ghozlan.

Analysts and activists such as Gamal Eid, a human rights lawyer, predicted the decrees could further stoke unrest in the country as it struggles to right a stumbling economy and push ahead with a fitful political transition.

“Mursi has committed a fatal mistake by decreeing his decisions cannot be appealed,” Eid said by phone from Cairo. “The move will trigger more anti-government protests and will increase public frustration. The people don’t need another dictator.”

The situation could get ugly – think back to the Battle of Tahrir Square – with the Brotherhood planning counter protests, Al Arabiya reporting:

The Muslim Brotherhood group ordered its members not to travel abroad as they might be needed to take on the streets to support “revolutionary” decisions, according to Egypt’s media sources.

A source told Anadolu Agency Thursday that the Muslim Brotherhood is in a state of alert and expected to start marches to defend “revolutionary” decisions that were expected to be made by Mursi.

Mursi became the chairman of the Freedom and Justice Party (FJP) when it was founded by the Muslim Brotherhood in 2011. He was FJP’s candidate for the May-June 2012 presidential election.

The Islamist group’s state of alert is also to counter expected violence that can destabilize the political scene and oust President Mursi and his government, the sources added.

Political parties and citizens, who deemed Mursi’s new decree as flagrant violation of the constitution, vowed to take on the street in what they called “Eyes of Freedom” one-million protest on Friday.

The constituent assembly drawing up the new constitution – which is dominated by Islamists and criticised by secular political forces – is being given special protection to complete its work so that Egypt has a new governing document and can proceed to new legislative elections.

But of most concern is the line that Mr Mursi’s decisions “are final and cannot be contested”. He starts to sound more powerful than the autocratic leader that Egyptians rose up to overthrow.

Morsi showed his best side earlier this week in helping bring about a ceasefire; today, if bloody clashes, beatings and deaths return to the streets of Cairo, the joyous scenes of early 2011 will seem further away than ever.