Will Straw presents five lessons for the UK from Barack Obama's 2012 US Presidential election victory. 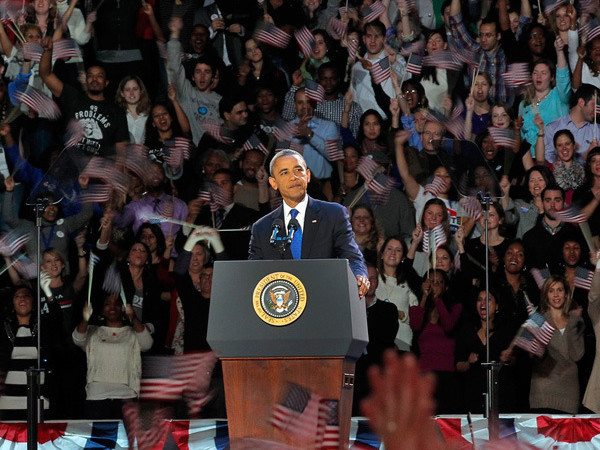 No. 10 is taking comfort from Obama’s victory, which makes him the first G8 incumbent to win re-election since the global financial crisis. In doing so he becomes the first US president since FDR to win re-election with joblessness above 7.9%. Conservatives will hope his message of ‘finish the job’ and ‘don’t let the other lot ruin the recovery’ will work in 2015. The key distinction between Obama and Cameron is their economic strategy. Obama has sought to avoid meaningful deficit reduction until after re-election while Cameron has made it the main plank of his government.

Romney’s attempt to win the election on the back of white working class voters failed. According to YouGov, Romney secured 58% of white voters including 66% of white people with no college education but it wasn’t enough to get him into the White House. Peter Kellner has recently provided compelling evidence as to why Labour would be wise to avoid a core vote strategy in 2015. He points out most voters that switched from Labour to the Lib Dems between 1997 and 2010 are now back in Labour’s camp while Labour still has further to go in persuading those who switched to the Conservatives to come back.

The lesson is equally valid for the Tories who need to avoid getting pulled into a right-wing cul de sac. Their task will be made harder if UKIP continue to gain 10% in the polls. The temptation to focus on Europe – which despite its many problems still animates only 1 in 20 voters – could prove too much for some Tories.

3). Parties win if they can build coalitions that are growing in size

Ruy Teixeira of the Center for American Progress has argued for many years the Democrats are on to a winner so long as they can hold together a coalition of voters from ethnic minorities, the college-educated, and young people. Each of these groups are growing as a share of the US population. As Sunder Katwala pointed out, Romney’s white vote strategy would have won him the election in 1992 when whites made up 87% of the vote but fails in 2012 because they have fallen to 72% of the electorate. Obama actually did even better than in 2008 with young people and Hispanic voters.

By becoming an anti-immigration and anti-intellectual party, the GOP has been its own worst enemy. In the UK, the demographic trends are distinct and more up for grabs. IPPR’s Graeme Cooke has analysed the expanding groups which includes ethnic minorities but also older people and low paid service sector workers. Both parties have everything to play for in attracting these voters.

Obama had 800 field offices across the country to coordinate his army of 200,000 volunteers. Unsurprisingly these were concentrated in the swing states with Obama’s infrastructure hugely outnumbering Romney’s. In ­Ohio he had 131 offices to 40, 106 to 47 in Florida, and 61 to 30 in Virginia. With the margin of victory just 0.5 per cent in Florida it is clear the ground game helped push the president over the edge.

The contrast in the UK is striking. ConservativeHome revealed this morning the Conservatives have fewer than 100 members in four of their top 10 target seats. Labour does better but not by much. Its top 10 targets have between 179 and 408 members each (using 2010 figures). Compensating for population, both parties should be looking to recruit 40,000 volunteers in 2015 to replicate Obama’s effort.

Hold your nose but it’s true. As Guido Fawkes retweeted, 86 per cent of Obama’s ads were negative. Admittedly 79 per cent of Romney’s were also negative but Romney spent most of the summer defending himself against the Obama campaign’s framing of him as elitist and out of touch. Given that an unpopular incumbent government will be defending itself against a party which was booted out of power just five years previously, expect the next British general election to be equally negative.

If the US election is anything to go by everything will depend on who can get their attack in first.