The Bank of England appears to have thrown in the towel on growth with the publication of the latest Inflation Report, but where does this leave the chancellor? 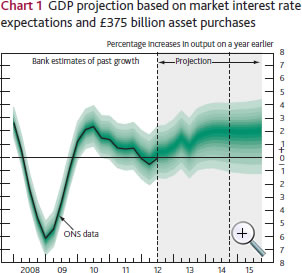 The Bank of England’s Inflation Report (pdf) is out and, as ever, well worth a read. From a quick initial skim over it, what is striking is quite how pessimistic the Bank has become about the UK’s economic prospects.

Headlines will no doubt focus on the Governor’s comments that a triple-dip recession is now possible with GDP likely to contract in Q4 as one-off boosts drop off the figures. But the bigger story is really the medium term forecasts for growth, as Chart 1 (see right) shows.

This is the weakest medium term growth forecast since the Bank gained operational independence in 1997.

The gloom comes across from the opening paragraph (p. 5) onwards:

The UK economy has barely grown over the past two years, as it has laboured against the consequences of the financial crisis and its impact on global demand, a sharp squeeze in domestic spending power and a necessary fiscal consolidation.

The period of weak demand has been accompanied by stagnant productivity, raising questions about the extent to which the supply capacity of the economy has expanded. Increases in energy and other import prices and in VAT have meant that CPI inflation has been well above its 2% target for much of this period.

The report goes on to note that growth is likely to be below its historical average throughout the forecast period, that household spending will remain weak, we will see only a “modest” recovery in business investment and we are set for a “prolonged period of weak growth” in productivity.

The FT’s Chris Giles has tweeted that the most significant sentence in the report is the innocuous sounding:

The likelihood that demand and supply capacity will continue to move together means that some of the sources of uncertainty affecting the outlook for GDP have limited implications for inflation in the medium term.

But simply, this is the Bank saying “weak growth is unlikely to bring down inflation”, or as Chris translates:

The big news in the inflation report is that the MPC now thinks weak growth has no effect on inflation – NO MORE QE.

This is a report which reads like the Bank throwing in the towel – growth is going to be historically weak and there is nothing we can do about it.

The big question now is where this leaves George Osborne’s economic strategy – which has always been premised on expansionary monetary policy offsetting tight fiscal policy. He looks set to remain committed to fiscal contraction and the Bank doesn’t seem in the mood to provide any more monetary support.

Plan A is now over, does he have a plan B?

This article was first published on ToUChstone.

5 Responses to “Bank of England throws in the towel on growth – where does this leave Osborne?”