Andrew Lansley yesterday failed to condemn a Tory council leader who said global warming "may not exist" and was dreamt up by “bourgeois left-wing academics”. 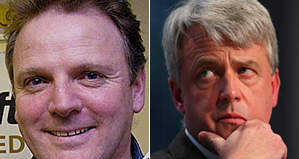 Failed former health secretary Andrew Lansley yesterday failed to condemn a Tory council leader who said global warming “may not exist” and was dreamt up by “bourgeois left-wing academics”.

He was asked by Lib Dem MP for Cambridge, Julian Huppert:

“The leader of Cambridgeshire county council recently wrote that global warming “may not exist” and that if it does, it is “not caused by human activity”.

“He described it as a theory espoused by “bourgeois left-wing academics”. Does the Leader of the House join me in condemning this irresponsible and anti-scientific position, and will he find time for a debate about evidence-informed policy?”

Failing to criticise in any way the climate denying Tory council leader, he replied:

“I will not join my Honorouble Friend in that respect, although that does not mean that I agree with the leader of Cambridgeshire county council. We are all allowed our views, and he is allowed his.”

He may not agree with him – but he clearly fails, when presented with an open net, to say he disagrees with the view global warming “may not exist” and is a “left-wing” conspiracy.

Just as worrying as a Tory cabinet minister in the “greenest government ever” being ambivalent on climate change conspiracies is the fact a man such as Cllr. Nick Clarke could join from that famed repository of sane science-believers UKIP and rise up the ranks of David Cameron’s Conservatives to lead a council.

Then again, given the prime minister’s pitchfork-wielding contempt for “the intellectuals of other parties”, maybe it’s not so surprising his dimmer colleagues think as they do…

38 Responses to “Does Lansley think global warming is a “bourgeois, left-wing” conspiracy?”