Tony Burke examines the recent borrowing figures and the government's failure to deliver its promise to control borrowing. 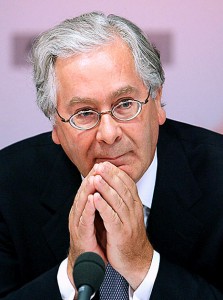 Public sector borrowing in the UK grew last month to the largest ever recorded – making it very unlikely the government will be able to meet its self imposed targets set for deficit reduction – and at a time when the government is rolling out an ex-PM’s to spin that the economy may have turned the corner and the green shoots of growth are poking through.

Not so says Lee Hopley, chief economist at the Engineering Employers Federation, who commented at weekend:

“It feels like the mood has shifted down over the last quarter: the dark clouds do appear to be gathering.”

The government will have to announce a u-turn in the autumn spending review and concede UK debt will continue to grow during the term of the parliament – up until and beyond the end in 2015. This year’s figures have also been boosted by a £28 billion “windfall” from the Royal Mail’s pension funds.

Without that “windfall” the public debt for this year would be £59 billion, up 21% on the first five months of last year. The government target for the year is to reduce the deficit by 4.6 per cent.

The governor of the Bank of England, Sir Mervyn King, has given the green light for the government to miss their own targets on spending when he said he would not “complain” if the government missed its targets because the world economy has grown slowly and the UK has kept pace.

“If it’s because the world economy is growing more slowly, then it would be acceptable. It would not be acceptable to miss the debt target if there was no excuse for it.”

So that’s all right then?

Austerity is biting – and there is much more to come. The government’s own borrowing targets are way off beam. So how will Osborne deal with it? Probably by more cuts to pay for the mounting costs of economic failure leading to attacks on welfare benefits and lower tax revenues as workers are laid off or forced into low paid employment.

But then we are all in this together. Aren’t we?