CND lays out the way in which the UK could achieve disarmament in the near future - with widespread cuts to the MOD, is this not the time to scrap Trident? 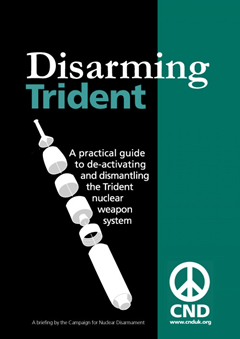 With the cold war long over and government funds in short supply, defenders of nuclear weapons are casting around, with some difficulty, to make a compelling case for replacing Trident. One of the least convincing arguments – though I have heard it trotted out by government ministers – is that it would be practically far too difficult to get rid of nuclear weapons, therefore we have to keep them.

Indeed, this question reared its head during the recent discussions on what Scottish independence might mean for the future of Trident.

If an independent Scotland rejected Trident – and it had nowhere to go – how precisely would the nuclear weapons system be dealt with? The reality is the disarmament process is relatively simple.

CND’s new report, “Disarming Trident” (pdf) is designed precisely to demystify the disarmament process: setting out in practical steps how within four years Britain could dismantle its nuclear warheads. Let it not be said that anti-nuclear weapons activists aren’t practically-minded!

The report is based on the Ministry of Defence’s (MoD) practices for operating the Trident nuclear weapons system. This includes the processes of deploying, removing and storing nuclear warheads used by the Vanguard class submarines, based at HMNB Clyde, as well as a detailed knowledge of the MoD’s infrastructure and facilities which service Trident.

When a Scotland-focused version of this report was released in June it was commended by international defence and security experts as proposing a serious and credible timeframe. Over eight phases, each with realistic timeframes, the report explains how Britain’s nuclear weapons could be deactivated and then dismantled.

Here are the phases in brief (though for full details please see the report):

The report also discusses verification measures which could be used to confirm the completion of the phases without compromising sensitive or classified information.

Since 2007, Britain and Norway have collaborated on an initiative to explore how a non-nuclear weapons state (NNWS) could verify a state had dismantled its nuclear arsenal. Through several practical exercises, the use of Information Barriers (IBs) was developed. IBs work through agreed boundaries between parties which protect sensitive information/components while enabling enough transparency to ascertain whether or not nuclear weapons are being dismantled.

Though this concept is still in development, the framework of this process provides a foundation on which to build confidence in future dismantlement verification techniques.

With so much hyperbole and obfuscation in the nuclear weapons debate, as much clarity and honesty is needed as possible. We hope this report goes some way to showing the clear steps which could be taken to deactivate and dismantle Britain’s nuclear weapons – and the rapid time frame in which this could happen. In doing so, we hope to debunk the myth that disarmament is just too much trouble to be worth it.

Even previous supporters of Trident are starting to question spending more than £100 billion on replacing and maintaining it. This is especially acute at a time when conventional defence forces are being axed to pay for Trident, the government’s own National Security Strategy downgraded its significance, and senior military figures say it is redundant.

Now more than ever, there should be a clear-headed debate about whether or not maintaining a nuclear weapons system is the right thing to do, and this report makes that a more accessible and intelligible prospect.

One Response to “Disarming Trident: A practical guide to de-activating and dismantling the UK’s nukes”