With Rio hosting the Games in 2016, expect to see much more of London 2012 judo champion, the Brazilian Sarah Menezes, in the years ahead. 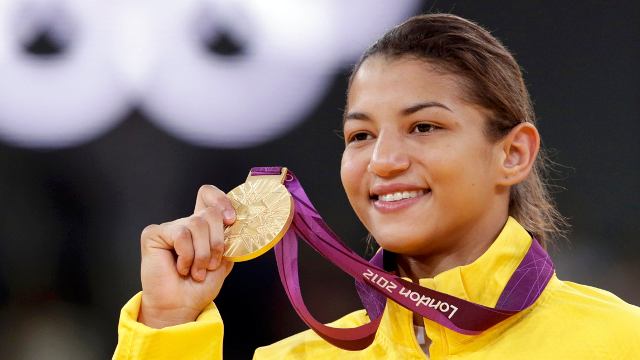 Judo competitor Sarah Menezes is the first Brazilian woman to win an Olympic gold medal at judo, winning the women’s -48kg event on the opening Saturday of the Games.

Sarah Menezes became the first Brazilian woman to win an individual judo gold at an Olympic Games with victory in the under-48kg final.

The second-seeded Menezes dethroned reigning Olympic champion Alina Dumitru of Romania in the final. Menezes had been frustrated but landed the winning throw in the final minute.

Menezes recently revealed her parents initially tried to stop her from taking part in judo, as they believed it was a men’s sport, as The Sun Daily reports:

Olympic judo champion Sarah Menezes revealed Sunday that her parents tried to stop her from taking up the sport which they believed was for men only.

The 22-year-old from Brazil became the first woman from her country to win an Olympic judo gold before admitting that she had to overcome a series of barriers to succeed.

Having won bronze in the previous two years at the world championships, she finally ascended the top step of the podium in London.

And at just 22 years of age, there may be much more to come from the world No. 3 and twice former world junior champion.

“When I started judo my parents said it was a sport for men. My whole life I’ve liked challenges…

“The truth is the major problem was my studies so I came to an agreement with them. In order to continue in the sport I had to do well in my studies.

“When I started to travel (to competitions) my parents realised I had talent.”

With Rio hosting the Games in 2016, expect to see much more of Sarah Menezes in the years ahead.