Nawal El Moutawakel: “I would wake up in the morning and say, I need to do this for the women of Arab states, African countries and Muslim women.”

For all the publicity that the International Olympics Committee (IOC) receives, did you know that one of its members was the first female Muslim to win an Olympic gold medal? 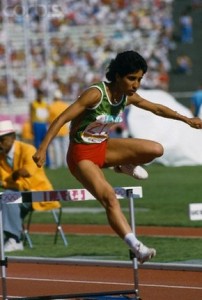 Nawal El Moutawakel is a Moroccan hurdler who not only achieved a historic moment for Muslim women, but also won the first ever 400m Women’s hurdles event in 1982 and was the first Moroccan athlete to win an Olympic medal.

El-Moutawakel believes her win helped change the lives of thousands of Muslim women across the world.

Previously, it was thought women couldn’t do well in sport, but after her triumph athletics became a possibility for a whole generation. In fact, el-Moutawakel became such an iconic figure for Muslim women that she used to receive letters addressed simply: Nawal el-Moutawakel, Morocco.

El-Moutawakel was quoted as saying:

“King Hassan II called me right after I crossed the finish line… Someone took me into a special room and said ‘The King is on the phone.’

“He said: ‘I am so proud of you. The entire country is going wild. This victory has made us all so happy and proud of you.’ I was speechless. I couldn’t believe he was awake and watching. It was in the early hours in Morocco.”

The success of legendary female athletes always tends to stem from supportive parents; Nawal’s parents especially believed in equality and she and her sisters were given the same sporting opportunities as her brothers. Iowa State University noticed how talented Nawal was at hurdles and offered her a scholarship, to which she accepted but begrudgingly left her family.

Eight months later, Nawal won the gold medal that would firmly put her in the history books.

Nawal is now secretary of sport for Morocco and sits on the IOC. She started a 5km run in Casablanca called Courir pour le plaisir, which she hopes will encourage women feel “the power of sport”.

El Moutawakel’s victory was a surprise to most—running the event in 54.61 seconds, she beat her personal best by 0.76 seconds. But in that moment, the enormity of her accomplishment weighed down her tiny 5-foot-3 frame.

The win wasn’t just for herself or even for her country; as the first woman from a Muslim nation to win an Olympic gold medal, she smashed stereotypes and proved human potential is limitless, even for women.

Since she won the gold medal in 1984, Muslim women from around the world have competed in the Olympics and won medals. El Moutawakel has closely followed the careers of many, including Ruqaya Al Ghasara, a Bahraini woman who defied Muslim fundamentalists in 2004 when she competed in the Athens games and became the first female athlete to wear a full hijab at the Olympics.

Nawal was quoted as saying:

“When I would wake up in the morning I would say, I need to do this for the women of Arab states, African countries, Muslim women, because if I do it, I don’t see why others can’t do it.”