George Osborne caved in to motorists earlier this year - will he do the same for rail and bus users? 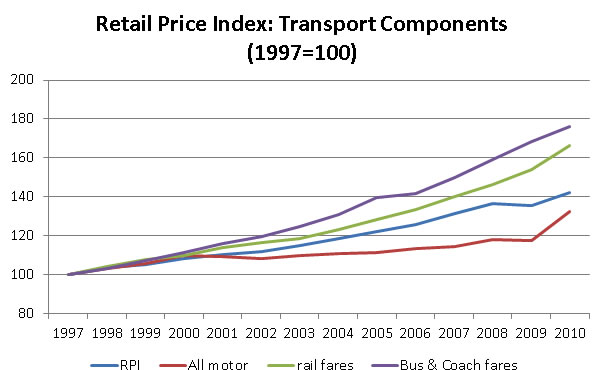 The news rail fares will rise by up to 6.2 per cent shows that if there is a war being waged on any of the travelling public, it is on those using public transport. George Osborne caved in to motorists earlier this year – will he do the same for rail and bus users?

Forthcoming research by IPPR shows rail fares have increased far more quickly than motoring costs in recent years. As the chart below (using data from the Department for Transport) shows, from 1997 to 2010, rail fares rose by 66.2 per cent while all motoring costs rose by just 32.5 per cent – equivalent to a 6.6 per cent fall in real terms.

Bus and coach fares rose by a staggering 76.1 per cent.

Since coming to office the chancellor has done plenty to keep down costs for motorists.

In a new report, due out this month, my colleague Lisa Hopkinson writes:

“In budget 2011 George Osborne proposed three changes to duty rates: an immediate cut in the rate by 1p, abolition of the escalator (replacing with a fair fuel stabiliser), and a delay in the two inflation-driven increases set for April 2011 and April 2012.

“In the autumn 2011 statement it was announced the 3.02p per litre increase due to take effect in January would be deferred until August 2012, and the inflation increase planned for 1st August would be cancelled. This cost a further £375 million in 2011-12 or £3.9 billion over 5 years.

“In June 2012 the chancellor announced a further delay in the fuel duty rate rise until 1st January 2013, at a further cost of around £550 million to the Exchequer. This shortfall in government revenue is to be met through greater than forecast savings in departmental spending, with details to be confirmed in the autumn 2012 statement.”

• Serious concerns over transport commissioning – how will Greening respond? 16 Dec 2011

Labour has said it would introduce a strict cap of one per cent above inflation across all routes, while transport secretary Justine Greening said yesterday he would try to use the autumn statement to see “what we can do to keep rail fares down to something affordable”. Her reputation as the public transport secretary is on the line.

6 Responses to “Will Osborne match his support for motorists with a fair fare for rail users?”