Eighteen-year-old Deepika Kumari is considered the world number one at Archery, but sadly finished her time at London 2012 without a medal. 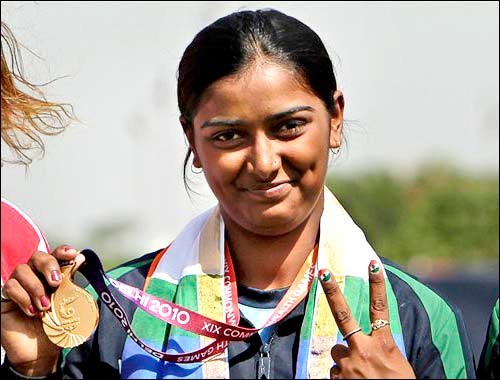 Eighteen-year-old Deepika Kumari is considered the world number one at Archery, but sadly finished her time at London 2012 without a medal.

It was in fact a Brit, Amy Oliver, who knocked Kumari out of the tournament.

Many hopes were pinned on Kumari by her home nation of India, as India Today reports:

Before the 2012 Olympics, there was a buzz around Deepika Kumari. The young girl from Ranchi was being talked about as one of India’s standout medal hopefuls.

Even MS Dhoni, the Indian cricket captain, who also hails from Ranchi, was rooting for her. In fact, some believed that a spot on the podium was a given.

The hype was perhaps justified. After all, Deepika did have the world number one tag on her bow. She had won a medal at every event that she had entered in the past few months. She was, on paper, the woman to beat in London.

But all the hopes were shattered in the first few days of the archery competition in the iconic fields of the Lord’s cricket ground. Deepika flopped big time in the team event.

The faithfuls termed it a blip. She would show her mettle in the individual competition, they claimed.

On came the singles event. India watched with hope and anticipation. However, the result was disappointing again. In many ways, worse than what it was in the team competition.

Experts suggest that Deepika’s world number one ranking, which eventually led to a host of expectations, was simply an eyewash.

Although the Indian shot well in various events in the run up to the London Olympics and made the most of her chances, many believe the performances didn’t quite merit the kind of climb that she had in the rankings.

Deepika was a gold medalist by the age of 15, winning the Youth World Archery Championship in 2009. She cleaned up at the Delhi Commonweath Games in 2010 by winning gold in both the women’s individual archery event and the women’s team recurve event.

An Archery coach has told a news website that India’s lack of success was down to the prospect of the ‘big stage’:

A distraught women’s archery coach Purnima Mahato says the only reason for India’s disastrous performance at the London Olympics she could think of is perhaps their inexperience at performing on the big stage.

Mahato told IANS on Thursday that she was as much puzzled at her wards’ performance, particularly that of Deepika Kumari, as anyone else back home.

Deepika Kumari, the daughter of a tuk-tuk driver from Ranchi who grew up practicing with a bamboo bow, one to watch at the Commonwealths in Glasgow in 2014 and at Rio in 2016, an amazing girl with an amazing story destined for amazing things.

One Response to “Deepika Kumari: The world number one archer who grew up practicing with a bamboo bow”