Freeman was a huge hit in Australia during the 2000 Sydney Olympics, especially after winning the 400m and being chosen to light the Olympic flame. 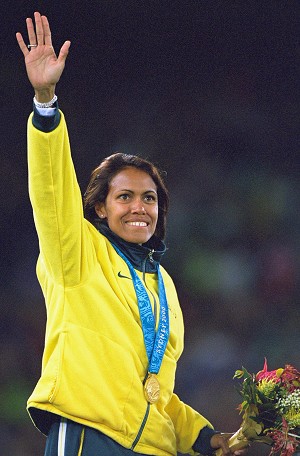 Cathy Freeman may be one of the most controversial Olympic women in the history books, as she was accused of being ‘unpatriotic’ after she insisted on competing under the Aboriginal flag.

Freeman was a huge hit in Australia during the 2000 Sydney Olympics, especially after winning the 400m sprint and being chosen to light the Olympic flame. However, she was rarely seen celebrating without her native aboriginal flag, to the criticism of some commentators.

“Being Aboriginal means everything to me. I feel for my people all the time. A lot of my friends have the talent but lack the opportunity.”

Freeman’s website tells of how, on her journey to the top, she faced discrimination from white Australians, and recalls winning one race at primary school, only to see the white girls she had beaten take the trophies.

She also told the Observer:

“I love my people and where I come from, but I am not at the Olympics to be political. I don’t think to myself that I’ve got to make this next move for the Aboriginal cause. I am at the Olympic Games to run the fastest 400 metres of my life.”

Previous to the Sydney Games, one of Freeman’s opponents, British runner Katharine Merry, was quoted as saying:

“No, I wouldn’t like to be in Cathy Freeman’s shoes… The people in Australia are expecting massive, massive things of her.

“I’ve just spent three months out there and she is huge in Australia. Her face is, like, everywhere. I’d rather that pressure was on her than on me.”

“But then, I wouldn’t mind having two World Championship gold medals and being the best in the world….

“Knowing Cathy, though, I don’t think she will fall apart. I think she’ll be all right.”

Freeman now runs the Cathy Freeman Foundation – an organisation that works to promote the equal educational opportunities of Indigenous children.

One Response to “Cathy Freeman: The face of Sydney 2000, the first Aboriginal Olympic champion”