For the last few months, the headline numbers have been good, but a detailed look at the figures gives plenty of cause for concern.

.
We now seem to be in a familiar pattern when it comes to labour market statistics – for the past few months the headline numbers have been good, but a detailed look at the figures gives plenty of cause for concern.

Today’s numbers show a fall in unemployment and rise in the number of people in work.  That is certainly good news, especially as much of the rise in employment was in full-time work. Some analysts have pointed out that that temporary hiring ahead of the Olympics may have boosted the numbers.

London was responsible for around half of the total growth in employment suggesting that may well be something in this and it will be several months before we can tell if this a temporary upward blip or if it represents more suitable growth in employment.

Many have been left scratching their head as the economy contracts but employment grows. Several factors point to underlying weakness in the labour market though that can help explain this conundrum. First this month saw yet another rise in under-employment to a new record.

Second there are concerns that much of the recent rise in self-employment may not represent genuine entrepreneurial zeal but rather disguised under- and un-employment.

Third the labour market performance is typically a lagging indicator, it reflects not what s happening in the economy today but what was happening 12-18 months before. Unless the economy turns around soon it may be only a matter of time before unemployment starts to rise again.

As TUC research published today shows the outlook for the ‘Class of 2012’ is the worst in almost twenty years.
To truly gauge the strength of the ‘recovery’ in the jobs market, the best place to look is earnings.
As the chart below demonstrates, the picture here remains grim. 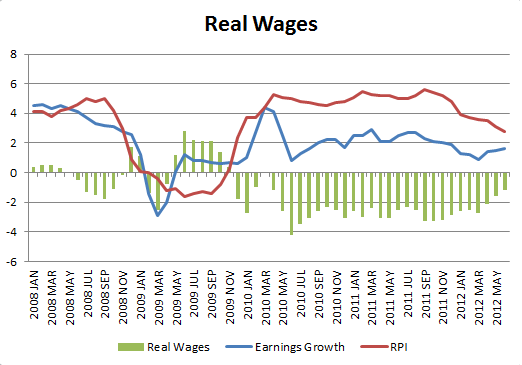 Despite a welcome fall in inflation since the autumn real wages continue to fall – even those in work are getting poorer by the month.
If we had a healthy labour market then one would expect wages to be rising and real earnings to begin to grow. There is little evidence that is happening.
Until we see sustained real wage growth and the squeeze on incomes starts to ease it’ll be hard to talk about ‘recovery’ in any meaningful sense.

16 Responses to “Is a rise in self-employment disguising unemployment?”