Is there a chance the pop singer's intention to discredit the politician will backfire, creating supportive sympathy for the FN leader?

French Front National leader Marine Le Pen announced her intentions to sue global pop star Madonna this week, for displaying a video image of her that has a swastika on her face. 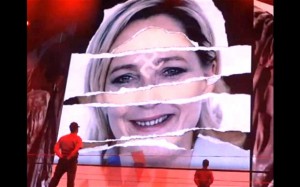 Although this image was show during Madonna’s recent Paris concert for her song ‘nobody knows me’, she has used it before in previous concerts.

The issue is compounded by the fact that an image of Adolf Hitler follows Le Pen’s image in the video. The crowd can be heard cheering in support of Madonna at the point where Le Pen’s image is shown.

On July 15, officials for extreme-right leader Marine Le Pen’s National Front (FN) announced the party has decided to sue Madonna for using an image of Le Pen with a swastika on her forehead during a July 14 Paris concert.

The segment also contained imagery of other world leaders the singer presumably has problems with, such as Pope Benedict, Sarah Palin, Hu Jintao and Hosni Mubarak.

“Marine Le Pen will defend not only her own honour but her supporters and the millions of National Front voters.”

Le Pen has been the most successful Front National leader to date. Although she failed to become an MP, her party gained 18% share of the vote in the first round of France’s presidential election.

Le Pen has been credited for trying to move the Front National away from extremist links and has been successful in appealing to a younger electorate. Her niece Marechal-Le Pen is currently the youngest member in French parliament.

But if the singer gets mostly applause from international audiences who identify Le Pen as Europe’s best-known face of xenophobic right-wing politics, she may find herself with fewer allies in France as a result of associating Le Pen with Nazism.

The reason? Though Le Pen presides over a reactionary and Islamophobic party, she’s also clearly not a fascist, not a Nazi and not Hitler.

Comparisons of Le Pen and her party to her father’s rule over the FN not only leave many people in France feeling Madonna’s jab misunderstands Le Pen’s relatively moderate positioning but even victimizes her with an unfair association with the Nazi symbol.

Madonna has not indicated whether she will remove the image for her forthcoming show in Nice on August 21st.

Is there a chance the pop singer’s intention to discredit the politician will backfire, creating supportive sympathy for the Front National leader?