We can only hope that scheduling Team GB’s women’ footballing debut to coincide with opening day hysteria will challenge past records on poor coverage.

The decision to fill the first day of the Olympics with six games of women’s football could make a lasting impact on the legacy of women’s sport after the Games. 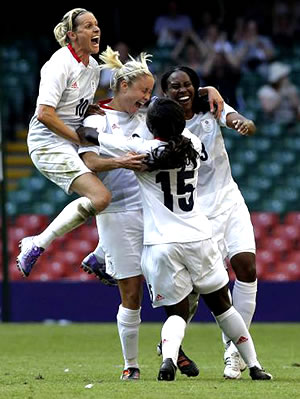 Left Foot Forward has been a constant critic of the lack of coverage of women’s sport, and we can only hope that scheduling Team GB’s footballing debut to coincide with opening day hysteria will challenge past records on poor coverage.

The coach of Team GB’s women’s football team played for England 66 times, scored 35 goals for her country and currently coaches the national team, but were you aware of Hope Powell before her appearance at yesterday’s game?

The England women’s team have recently printed their Twitter names on their shirts in an effort to connect with their fans.

Everton and England midfielder, Jill Scott, gave her opinion on the lack of coverage from a player’s viewpoint:

“The England players get a lot of messages through Twitter all the time asking ‘where can I watch the game, is it on telly?’ …And it’s disappointing that you have to continuously reply saying ‘no it’s not’.

“People are asking about it, so why can’t we put it out there? I’d like to see the media coverage change.

“I recognise that we are not going to be on BBC One every time we play, but even if we got an internet stream to the game so that people can watch it and access it, then that would be an improvement.

“The girls enjoy interacting with fans and Twitter has a been a massive thing for us. It gives supporters instant access to the players and we often respond.

“We don’t want to bypass traditional media, we do want to be in the newspapers along with all sports people and especially women in sport.”

Sport is considered to be one of feminism’s last frontiers and women can only be inspired by sporting role models, who need to be present in the mainstream media – as the chart below shows, on an average day women’s sport receives only a fraction of the media coverage of men’s sport:

Last year’s furore surrounding the all-male shortlist for Sports Personality of the Year put the issue back into the spotlight.

Tonight the BBC Sports Personality of the Year will be announced, with one thing certain: The winner will be a man. Not one single British sportswoman was deemed worthy of nomination for the award – in part due to the shockingly poor media coverage of women’s sport…

It is with 2012 in mind that the real scandal of the lack of recognition of women’s sport is most evident; we are missing a golden once-in-a-lifetime opportunity to enthuse the next generation of young women into sport, be it at elite level, semi-pro, club level or just playing for fun, for the sheer, unadulterated joy of it.

The issue came round again at the beginning of last year, following the now-infamous comments of Andy Gray and Richard Keys.

Left Foot Forward pointed out that sexism in sport may cause momentary outrage but won’t be stamped out unless the entire culture is changed:

The question “Is sexism still rife in football?” has been widely debated today [24 Jan 2011], yet will no doubt soon ebb away, just as it did five years ago when then Luton boss Mike Newell derided the appointment of a female assistant referee as “tokenism for the politically-correct idiots”; the underlying attitutes remain, and will do so for as long as the authorities, and in particular the media, fail to treat women in sport with respect and accord women’s sport the coverage it deserves.

Do a quick internet search and you’ll find almost every national newspaper has published a long feature on the lack of women’s sports coverage, but ironically they are also the ones failing to equally represent women on their sports pages.

Left Foot Forward will not only be crossing our fingers for Team GB this summer, but also for the prospect that London 2012 will set a precedent for the extensive coverage of women’s sports.