.
Overall, today’s employment figures were good, with unemployment down and employment up.

Later in this post, I will focus on some problems, but I don’t want to be churlish, so let’s start with the good news.

Other indications that the labour market improvement is real include:

The labour market has been improving since last autumn, but the overall totals disguise some less encouraging trends:

• The 181,000 increase in employment includes a 42,000 rise in the numbers of government employment programmes;
•  And a 11,000 rise in the number of unpaid family workers;
•  The increase in gainful employment is therefore 128,000;
•  And 32,000 of that is in self-employment – earlier this year, the Chartered Institute for Personnel and Development noted that the increase in self-employment has been larger in industries where it is normally uncommon, suggesting that we are seeing a rise in ‘odd-jobbers’, most of whom “would take a job with an employer if only they could find one”;
• The number of part-time employees rose 20,000, so:
• The increase in full-time employees was just 76,000: 42 per cent of the headline total. It is still an increase on the quarter, but compared with a year ago, this figure is down 120,000.

• Labour market statistics: Unemployment is falling, yet so are real wages 20 Jun 2012

Long-term unemployment, Mar – May, change over the quarter and year

Of course, long-term unemployment lags overall unemployment, which peaked in October. We would not expect that peak to be reflected in the over-6-months figures until the next set of data.

But the prospects for young people are more worrying. For one thing, youth unemployment may have followed the same pattern as the overall total, but the increase to last October was steeper and there has hardly been any decline since then: 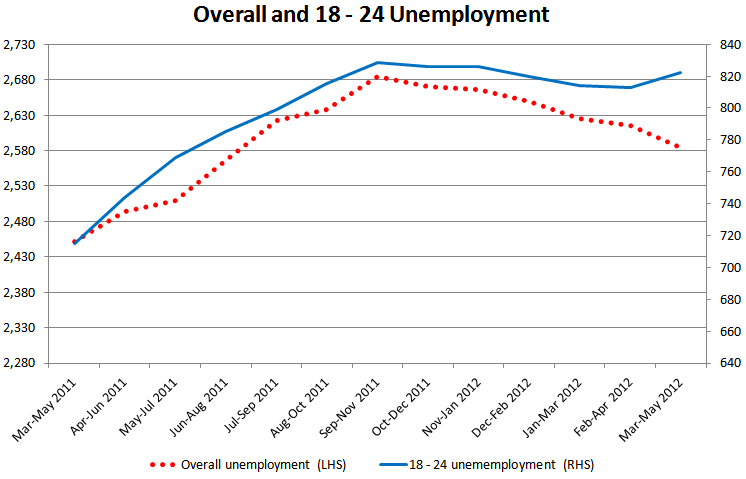 Secondly, the increase in long-term unemployment has been much sharper for young people than for all adults:

Thirdly, worklessness – young people who are not in full-time education or employment – has been growing in recent months, both in absolute terms and as a share of the total 18 – 24 year old population: 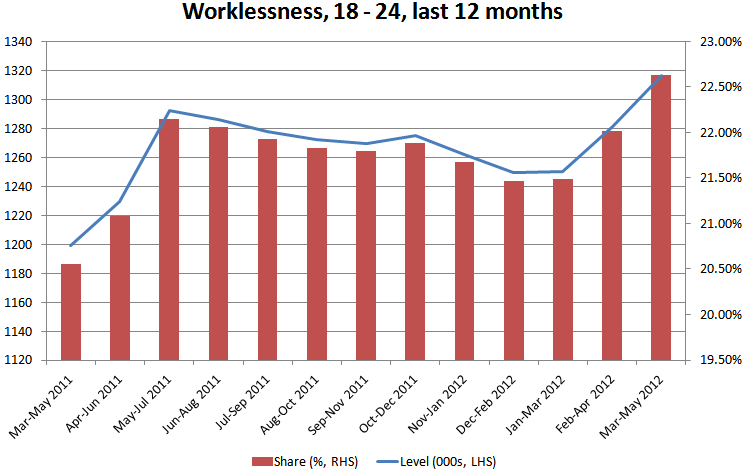 The case for action to prevent the emergence of another lost generation is stronger than ever.

There is a real puzzle about how to square the overall positive labour market data with the dreadful figures for economic growth. After today’s figures came out, David Smith (the Economics Editor at the Sunday Times) tweeted:

And you can see what he means. But today also saw the publication of the monthly summary of the reports by the Bank of England’s regional agents.

They talk to businesses at the grass roots and today’s round-up includes slowing consumer demand, a weakening housing market, positive but weakening investment intentions (with “a general sense of stepping back from expansion plans”), and private sector employers indicating they “did not expect much change in staff numbers over the next six months.”

The latest Purchasing Managers’ Indexes have found service sector growth “slumping to an 8 month low”, the “sharpest drop in construction output for two-and-half years” and conditions in manufacturing “fragile.” The Recruitment and Employment Confederation reported that “staff placements fall at fastest pace for almost three years.”

Or that the International Monetary Fund has cuts its projections for UK growth to 0.2 per cent in 2012 and 1.4 per cent in 2013 – the biggest downwards revision for an advanced economy.

I don’t want to sound like Eeyore, but I don’t think all this can be ignored. Part of the answer can be found in today’s productivity figures –output per hour, per worker and per job are stagnating and as a result unit labour costs are rising:

And remember that, by international standards, these long-run averages for increases in productivity are not brilliant. All this means that the positive labour market figures aren’t really sustainable. If productivity increases we’ll have growth without jobs; if it doesn’t we’ll have stagnation without jobs.