Hollande also expressed his support for the possibility of the Tour de France coming to Yorkshire. 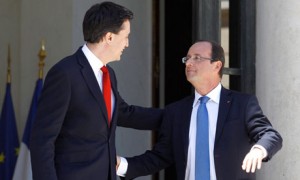 Despite Ed not having campaigned for Hollande during his bid for the presidency, he was warmly greeted in public on the steps of the Elysée Palace; an unusual occurrence for an opposition leader.

It seems clear that Hollande has a closer bond with Miliband than David Cameron as the Labour leader is now the most senior British politician to hold talks at the president’s official residence since his election victory in May.

As part of their short 35 minute meeting, they managed to discuss a variety of topics including the economy, the emergency situation in regards to youth unemployment, Syria and the Tour de France coming to Yorkshire in the future for its Grand Depart.

President François Hollande of France supports the campaign to have a stage of the Tour de France bike race pass through Yorkshire in 2016.

He offered his support during a meeting in Paris with Labour leader Ed Miliband, who is MP for Doncaster North.

Mr Miliband raised Bradley Wiggins’ triumph in the Tour de France and the bid by Yorkshire to bring the bike race to the North of England with President Hollande.

Ed also agreed to join a future centre left summit, which is being hosted by Hollande later this year to further talk about the agenda of jobs and growth.

Hollande and Ed both agree that harsh austerity measures are not the way to solve the economic crisis. Socialists will no doubt hope that Ed and Hollande working as a political force together can begin to steer Europe from the path of austerity to the path of growth.

After Ed’s meeting with Hollande, he addressed the Socialist group on the national assembly through a translator and was given rapturous applause when he stated that Britain’s place is “firmly in Europe”.

This may be the clearest sign yet of the Labour party’s policy on whether the UK should stay in or out of Europe.