Fractures have begun to appear in the Yes Scotland independence campaign as concerns over SNP dominance grow amongst its adherents. 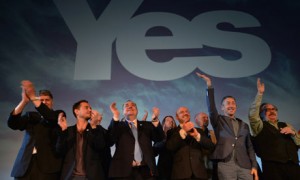 Just weeks after Alex Salmond launched a supposedly cross-party campaign calling for independence for Scotland, he and the SNP have been dealt a double blow. Two of the campaign’s key allies have expressed misgivings about the formal campaign, with one arguing that it has become too dominated by the SNP.

Arguing that Yes Scotland has now become “an entirely SNP vehicle”, Patrick Harvie – the co-convenor of the Scottish Green Party, who stood alongside Alex Salmond at the campaign’s launch – has pledged that his party’s conference in October will have the chance to decide what relationship it wants with the “SNP’s Yes Scotland campaign”. He observed:

“We are not full participants in Yes Scotland as an organisation because there was no basis on which to do so. We’re pretty frustrated that that hasn’t happened. It should’ve happened before the launch: [the SNP] chose the date, they chose the format and they chose the message. They’ve have not done the relationship-building which should have been done.”

Affirming that the Scottish Greens would continue to support independence as an ideal, he nonetheless warned that:

“If what the SNP put forward is just a campaign which is the SNP with a different brand then I don’t think it’s going to reach beyond the people who voted SNP, and that is not enough to win a referendum.”

Harvie’s views have been echoed also by Margo MacDonald. Formerly Deputy Leader of the SNP, and now an independent MSP for Lothian, MacDonald appeared by television link to endorse the Yes Scotland campaign launch. She explained:

“I’m sorry that Patrick Harvie feels that way, but I can’t say I’m surprised. I don’t think the SNP meant this to happen, but a lack of planning meant that whoever they drafted into do the jobs ended up being people they knew.

Patrick has said what a lot of people have been thinking and what I feared, but it’s too important to allow things to drift.

I’ll offer help to make things more broad-based. I’m not formally going to join, but I’m offering to help and be an honest broker.

I said from the outset that I want a sovereign parliament and independence, but that people like me were not happy aligning themselves with one political party.”

Whilst the Yes Scotland team has argued that it has been “working well” with Scottish Greens, those opposed to independence can scarcely contain their delight as they look at a campaign beginning to fracture.

• Ed Miliband: The future of the UK is ‘too important’ to be decided only by Scotland 7 June 2012

• Should Northern Ireland football scrap God Save the Queen? 13 December 2011

As news emerged that the anti-independence campaign would be working under the name Better Together, Patricia Ferguson, Scottish Labour’s culture and external affairs spokesperson, said of the latest developments:

“This is chaotic. The nationalist campaign has barely lasted three weeks and things have gone from bad to worse.

It looks like Patrick Harvie shares an experience many in the SNP have found – it is Alex Salmond’s way or the highway. Alex Salmond sees the referendum as his personal plaything. After all, there was a clue at the launch – the cinema was showing The Dictator.”