Sir Mervyn King heralded the chancellor’s £140 billion stimulus plan but rejected a similar plan when Labour were in power in 2007.

.
Governor of the Bank of England Sir Mervyn King yesterday heralded the chancellor’s £140 billion stimulus plan as a “textbook response” to the credit crunch, yet he rejected a similar plan when Labour were in power in 2007. 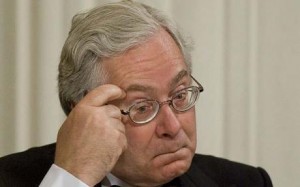 If yesterday’s stimulus plan had been approved by the Bank of England in 2007, Northern Rock could have been saved. Instead, King claimed such a stimulus package would “sow the seeds of a future financial crisis”.

During last night’s Mansion House speeches from George Osborne and Sir Mervyn King, it was announced that the Bank of England and the Treasury will join together to launch a “funding for lending” scheme, offering banks cut-price funds as long as they pass the benefits onto their customers.

It is hoped the stimulus will kick start mortgages and small business lending, preventing any further damage to the UK economy from the “debt storm” raging in Europe.

“We had to rebalance our economy because we had a trade deficit. So this was an absolutely textbook response to the situation.”

Osborne’s stimulus plan mimics similar measures enforced by the US Federal Reserve back in 2007, something a number of economists hoped would also be rolled out in the UK. However, in a paper submitted to the Treasury committee in September 2007, King rejected this idea.

The provision of such liquidity support undermines the efficient pricing of risk by providing ex post insurance for risky behaviour.  That encourages excessive risk-taking, and sows the seeds of a future financial crisis.  So central banks cannot sensibly entertain such operations merely to restore the status quo ante.

King and Osborne may be supping up the praise for their recent announcement but underneath the smiles and congratulations, is King asking himself why he didn’t make this move when he had the opportunity five years ago?