The recent rise in the Labour lead is arguably more to do with UKIP than Labour.

The British media has made no secret of recent poll figures showing up to a 14 point lead for Labour over the Tories.

“Labour has opened its biggest opinion poll lead since the general election as the Conservatives struggle to recover from the aftershocks of the much-criticised Budget, according to the latest “poll of polls” for The Independent.

“It puts Ed Miliband’s party at its highest support since he became leader, suggesting Labour is continuing to reap the benefits of the anti-Tory backlash since the Budget in March.”

These reports could lead to the assumption that Ed Miliband’s party is wooing former Tory voters over to the left, but close analysis of YouGov’s results show this is not the case. It is the rising popularity of UKIP and the equally descending attraction to the Liberal Democrats that is responsible for Labour’s lead.

The graph below shows the weekly increase of people whose voting intention has changed from Conservative to UKIP; a figure that has almost doubled since the beginning of March. 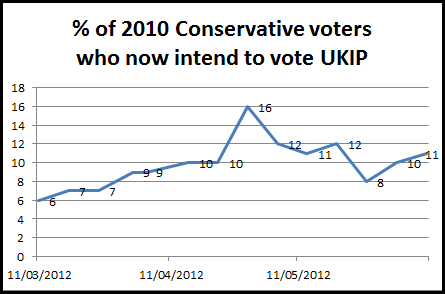 Tim Montgomerie, writing for the Times back in April, said:

On issue after issue, Nigel Farage, the UKIP leader, is directly wooing unhappy Conservatives. UKIP’s position on human rights laws, foreign aid, immigration and gay marriage all appeal to those most unhappy with the limits that coalition has put on Mr Cameron.

By campaigning against the high-speed rail link and the construction of wind farms, Mr Farage is also attempting to detach the Nimby vote from the Conservatives.

• If psephology is destiny, Cameron will be forced further to the right 14 May 2012

A Guardian article last month also pointed out that the majority of ‘Ed’s converts’ were former Lib Dem voters:

A YouGov survey for the Fabian Society shows that “Ed’s converts” – people who didn’t vote Labour in 2010 but currently back the party – are made up mostly of disgruntled leftwing Liberal Democrats many so disillusioned that they are very unlikely to vote for Nick Clegg’s party again.

About 75% of the converts – who have helped Miliband and Labour open an eight-point lead over the Tories in the poll – are former Lib Dems, 18% are ex-Tory supporters, and 7% are former supporters of other parties or people who did not vote in 2010.

One cannot deny that a Labour lead is relatively good news for the left, but a vote for UKIP instead of the Conservatives cannot be claimed as a victory. If anything, voters who empathise with smaller parties, like UKIP, may choose not to stray away from the two main parties on election day in the hope of avoiding another coalition.

But the recent rise in the Labour lead is arguably more to do with UKIP than Labour. The electorate, in fact may still be drifting to the right.

30 Responses to “Labour’s poll lead may be surging, but it’s due in large part to the rise of UKIP”