As the decisive elections in Greece conclude and the G20 summit in Los Cabos begins, world leaders must refocus their attention on the ailing economy.

As the decisive elections in Greece conclude and the G20 summit begins, world leaders must refocus their attention on the ailing economy as new research shows global recovery has stalled again. 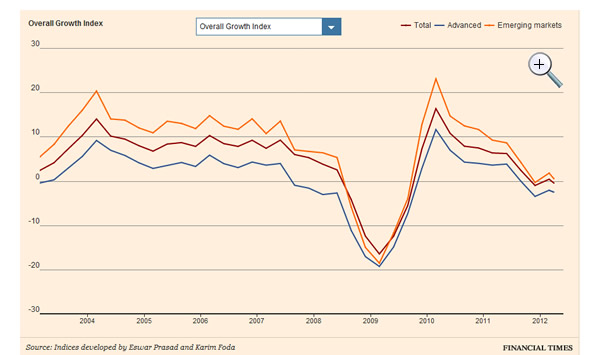 The FT/Brookings Tiger index showed world growth stalling after an initial rapid recovery from the 2008-09 economic crisis. Growth in the US was slowing, much of Europe is in recession, China’s growth outlook has weakened, the reform processes in India have stalled and other large emerging economies have slowed dramatically.

As leaders of the most powerful economies gather on Monday in the Mexican beach resort of Los Cabos, expectations are low that the G20, billed as the world’s “premier economic forum”, will offer co-ordinated action rather than hot air.

European leaders are nervous that the summit will follow the same script as the Cannes G20 last November, which broke up without any material progress, showing world leaders, and Europe in particular, to be impotent in the face of market and economic storms.

In the run up to the Greek elections, polls suggested radical anti-austerity party Syriza would gain the majority of the votes, sparking fears Greece would subsequently refuse to follow the terms of their bailout and possibly be forced to leave the single currency. However, it seems fear of leaving the euro outweighed any attraction the Greek people had towards the charismatic Syriza leader Alexis Tsipras as pro-bailout party New Democracy gained the majority of votes yesterday.

Antonis Samaras, leader of the New Democracy party who won the election with 29.7% of the vote, will today try to forge a coalition government. Due to a rule in Greece that grants the successful party 50 extra seats, New Democracy holds 129 seats, Syriza have 71 (26.9% of the vote) and socialist party Pasok have 33 (12.3%). Extreme right party Golden Dawn, a representative of which made headlines recently after attacking a female politician live on television, retained their minority with 18 out of the 300 seats.

• Developed world voters: ‘Austerity is failing, the banks have too much power’ 12 Jun 2012

• Eurobonds are about solidarity, which is not Cameron’s strong point 8 Jun 2012

World leaders may have breathed a collective sigh of relief following the success of Greece’s pro-bailout party yesterday, but they should now expect further pressure to ensure the security of the single currency and to implement a successful route to economic recovery.