The chancellor today blamed Labour for lax regulation of the banks, yet accused them in 2006 of being too tough on regulation.

.
George Osborne today blamed the previous government for the lack of banking regulation that led to the Barclays scandal. However, he was attacking the Labour Party for quite the opposite back in 2006 when he accused them of enforcing “too much regulation”. 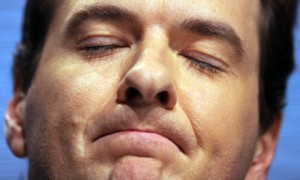 Writing for the Telegraph in June 2006, the chancellor said:

“I fear that much of this regulation has been burdensome, complex and makes cross-border market penetration more difficult.

“This is exactly the wrong direction in which Europe should be heading and it threatens the global competitiveness of the City of London.”

Today, Osborne had a change of heart and now feels the last government’s regulation system was not strict enough.

“Through 2005, 2006, and early 2007, we see evidence of systematic greed at the expense of financial integrity and stability. They knew what they were doing wrong.

Yet no one at Barclays prevents them. And no one in the tripartite regulatory system knows anything about it. The Government of the day was literally clueless about what was going on.

This government is getting rid of the whole tripartite system. The Financial Services Bill now before Parliament will create a new, far tougher regulatory system.”

• Krugman: Government deficits are a consequence of the crisis, not a cause. 28 Jun 2012

• Miliband: Time for prosecutions, proper regulation and an end to the “casino culture” 28 Jun 2012

Osborne isn’t the only culprit in this story, as the prime minister also confessed his distaste for Labour’s “excessive bureaucratic interventionism”:

As a free-marketeer by conviction, it will not surprise you to hear me say that a significant part of Labour’s economic failure has been the excessive bureaucratic interventionism of the past decade too much tax, too much regulation, too little understanding of what our businesses need to compete in the modern world.”

Labour hardly wrapped itself in glory with its approach to the City before the financial crisis, but Osborne should know those in glass houses shouldn’t thrown stones.