The European Conservatives and Reformists (ECR) group has hit the headlines again after one of its members invited a far-right, anti-Semitic priest to the European parliament. 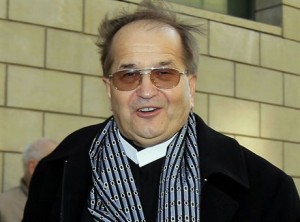 Father Tadeusz Rydzyk from Poland founded a right-wing radio station that has been condemned by the Vatican and Jewish organisations after broadcasting anti-Semitic views.

Previously a supporter of former President Lech Kaczynski’s Law and Justice Party, the priest was condemned by the premier  – who died in a plane crash in 2010 – after a tape emerged of Rydzyk’s anti-Semitic rants.

A Polish MEP belonging to the ECR group invited Rydzyk to parliament while the controversial priest was in Brussel promoting the TV arm of his radio station.

Four Polish MEPs from the ECR group attended a rally with Rydzyk, where key Tory ally and ECR vice-chairman Ryszard Legutko made a speech and fellow ECR MEP Miroslaw Piotrowski sponsored the meeting and was seen sitting alongside Rydzyk.

It is not the first time the ECR group, established by Cameron in 2009, has been embroiled in controversy. Left Foot Forward previously reported that the ECR group’s former leader had expressed homophobic views and disputed the slaughtering of Jews in the Second World War.

“The Conservatives have serious questions to answer about why they allowed the group they created in the European parliament to be associated with an event like this.”

Chairman of the European Conservatives Martin Callanan insisted that the event was nothing to do with the ECR, yet the Guardian saw evidence that proved otherwise:

“Despite Callanan’s claim, the ECR’s logo was used to publicise the rally and the meeting. Emails seen by the Guardian show that an ECR press officer, Mateusz Kochanowski, helped to publicise the event circulated photographs of Rydzyk using the group’s logo.

“The ECR also published a Polish press release on its website , illustrated with a photograph of Rydzyk.“

“Mr Kochanowski is the Law and Justice delegation’s press officer and works under their instruction,”

Even Cameron’s deputy, Nick Clegg, has no faith in the ECR group, saying in a Leader’s debate:

With the Eurozone high on the political agenda, groups like ECR could find themselves pushed further into the spotlight and with their dubious history, Cameron might begin to regret setting them up in the first place.