The government's rejection of stimulus measures to promote growth has left the British economy static, with declining growth and increasing inflation.

Although there were no substantial changes to economic policy in the UK during the last month, the chances of further steps being taken to support growth increased.

The IMF, in its annual review of the UK economy, called on the Bank of England to cut interest rates from their record low level of 0.5 per cent and to increase the level of quantitative easing. At its June meeting, the Monetary Policy Committee ignored this advice and left interest rates and the amount of QE unchanged, perhaps because its members are worried about inflation continuing to exceed their forecasts.

However, it seems inevitable that monetary policy will be eased again over the summer months, unless there is an unexpected rebound in economic activity. Meanwhile, the IMF also said the Chancellor should look at fiscal measures to boost growth. These should include shifting spending from areas that have a relatively low impact on demand to those that have a high impact, such as infrastructure spending.

In addition, if the economy remains weak, the IMF now believes that the Chancellor should slow the pace of deficit reduction. 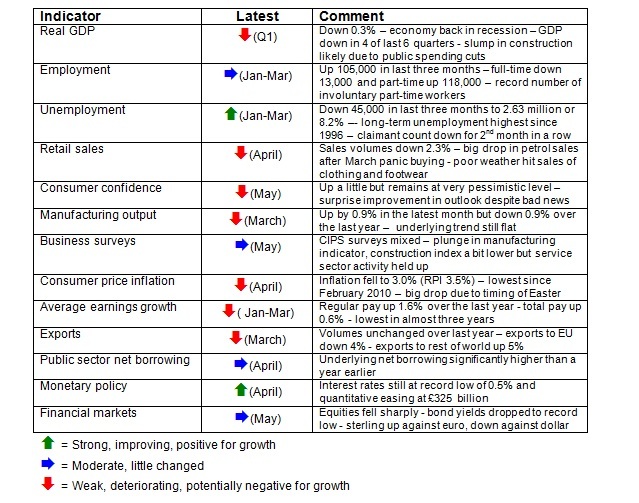 Over the last year and a half, the UK economy has performed far less well than expected. Inflation has remained stubbornly high and, according to the official data, there has been no growth in real GDP.

Economists and politicians dispute the causes of this underperformance, variously blaming the government’s fiscal policy, high commodity prices and the crisis in the euro zone. In fact, all three have played a part.

Some economists have also disputed the picture shown by the official statistics, claiming that the economy is not as weak as suggested by the real GDP data. They argue that business surveys are a more reliable measure of economic activity in the short-term and point in particular to the monthly purchasing managers’ surveys, which suggest the economy continued to expand over the last 18 months, albeit at a subdued pace.

As supporting evidence, they highlight the employment data, arguing that increases in private sector employment are inconsistent with an economy that is not growing.

Historically, there have been periods when the evidence from business surveys has diverged from the official GDP statistics and later revisions have shown that the surveys were right and the official data wrong. But, as the statisticians point out, that there is no systematic bias to pessimism or optimism in their initial estimates and their best guess is that the UK is indeed back in recession.

Only time will tell which side is right. But there is no disputing the fact that growth has been sluggish at best and is unlikely to pick up pace in the next few quarters.

GDP down 0.3% in first quarter

Revised figures show real GDP contracted by 0.3% in the first quarter of 2012, a little more than the preliminary estimate of a 0.2% fall. This confirmed the economy is back in recession. Construction output dropped by 4.8%, probably largely as a result of the government’s cuts to its capital expenditure programme.

This drop was reflected in falls in investment spending and inventory building. Net exports were also negative for growth, so the failure of the economy to grow is reflected in its failure to rebalance towards export and investment-led growth.

Employment up – but only for part-time workers 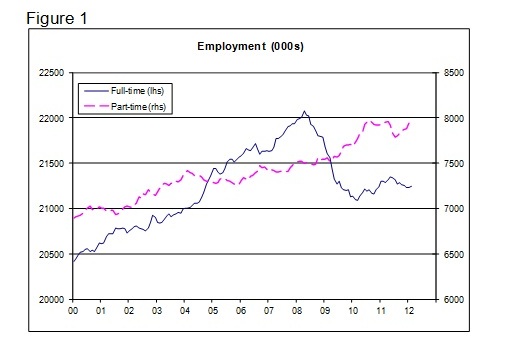 On the Labour Force Survey (LFS) measure, unemployment fell by 45,000 over the latest quarter. As a result, unemployment in the three months to March was down to 2.63 million, or 8.2% of the labour force. However, long-term unemployment increased by 27,000 to 887,000 – its highest level since 1996 – and could top 1 million before the end of the year.

After a 2.0% increase in March, the volume of retail sales slumped by 2.3% in April. Sales in March were boosted by panic buying of petrol at the end of the month and good weather. In April petrol sales fell sharply and poor weather hit sales of footwear and clothing. Discerning the underlying trend in sales is difficult when special factors are having such a big effect, but it appears to have slowed a little after an increase around the turn of the year.

Consumer confidence increased a little in May as households reported improved sentiment about the outlook for the economy and their own finances. But it remains at a historically very low level.

Manufacturing output was up 0.9% in March, but this followed a 1.1% fall in February. Output over the last three months was unchanged from its level in the previous three months, with seven sectors reporting increases and six declines. The underlying trend in output appears to be flat, as it has been for well over a year.

The CIPS purchasing managers’ index for manufacturing slumped in May to 45.9 – its lowest level since May 2009 and the second biggest drop in the survey’s 20-year history – suggesting the sector is firmly back in recession. The construction indicator also fell in May, though only modestly. Meanwhile, the services index was unchanged at 53.3, suggesting the sector continues to expand at a slow pace.

Consumer price inflation fell from 3.5% in March to 3.0% in April – its lowest level since February 2010. The big drop was largely the result of the different timing of Easter in 2011 and 2012 (which has a big effect on travel costs, particularly air fares). Inflation is likely to remain within 1 percentage point of its 2% target for the remainder of 2012 and should fall further in coming months, though it has proved sticky recently. See Figure 2: 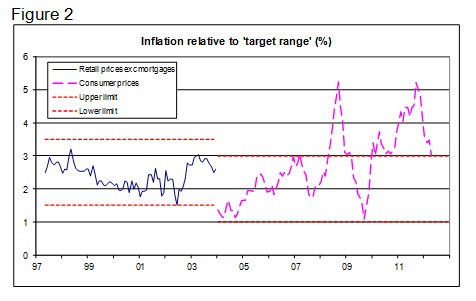 Average earnings increased by just 0.6% in the year to the three months ending in March, the lowest rate of increase since March-May 2009, when earnings were hit by large cuts in bonuses in the financial sector. Regular earnings, which exclude bonuses, were up only 1.6% and in the public sector are increasing at the slowest rate on record.

Public sector net borrowing (excluding financial interventions) was -£16.5 (i.e. a surplus) in April, but this included a transfer to government of £28 billion as part of changes to the Royal Mail pension scheme. If this is excluded, net borrowing was significantly higher than in April 2011.

The Monetary Policy Committee left interest rates at 0.5% in June and the scale of quantitative easing (QE) at £325 billion. This was despite the minutes of May’s meeting showing there was serious consideration given to an easing of policy, and subsequent calls from the IMF for such a move. Members may still be a little worried by inflation’s failure to fall as rapidly as expected.

Equity markets dropped sharply during May and the FTSE-100 ended the month at its lowest level for over six months. Bond yields also fell and the yield on a 10-year gilt was down from 2.2% to 1.6% – its lowest ever level. See Figure 3: 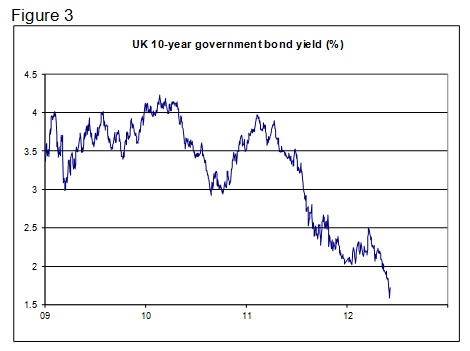 Meanwhile, sterling fell against the US dollar but was up against a weak euro. All these moves can be explained primarily by increased concerns about the euro zone, particularly speculation that Greece would be forced to leave it.

19 Responses to “Economic update – June 2012: The economy – and the government’s policies – going nowhere”