Vidal Sassoon, stylist to the stars, has died aged 84 in Los Angeles; Left Foot Forward pays tribute to the anti-Fascist hero of yesteryear, who fought Mosley’s Blackshirts across London, with this feature interview in IndyMedia from 2010, in which he recollects his foremost years

Gradually, men rise up to confront them. Jews back from the war, young radicals, and demobbed English blokes determined to tackle in their streets the evil they had spent six years fighting. Armed with fists, coshes and the occasional knife or knuckle-duster, they depend above all on their spirit as a group, and their bravery as individuals.

And one of the bravest of them all, certainly one of the toughest, is a teenage hairdresser’s apprentice called Vidal Sassoon. 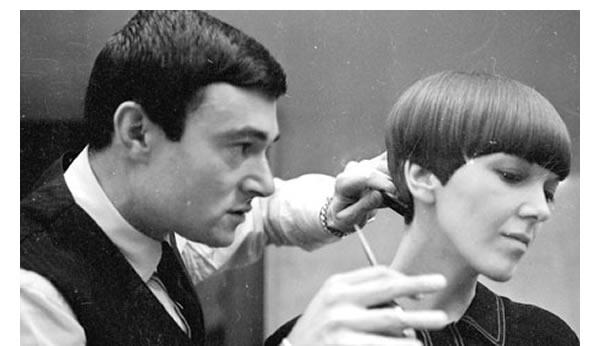 It is one of the most unlikely bits of fashion trivia anyone could imagine. Vidal Sassoon, the man who invented modern hairdressing, gave us the Five Point Cut, the Asymmetric Bob and Mia Farrow’s $5,000 haircut for Rosemary’s Baby, was a street-fighting man. He was harder than the painted nails of his lady clients.

Reclining at the Beverley Hills Mansion he shares with his fourth wife Ronnie and his beloved shih tzus, Sassoon, now 70, looks tanned and fit (helped by regular doses of yoga and Viagra) as he casts his mind back towards the end of the Second World War to tell a story that few have heard, and about which even his friends have been in the dark for more than half a century.

A tale from London’s dank days of austerity when the man who made his name by shaping heads was more interested in breaking them.

“When I came back to London after the evacuation I was 17. I wanted to be a footballer but my mother insisted I get a profession, so I was apprenticed to a very distinguished hairdresser called Adolph Cohen, who was known by everyone as The Professor. It was a happy time. We lived on the fourth floor of a Petticoat Lane tenement building, where the smell of bagels wafted up from the bakery downstairs.

“The Lane was a maze of colourful humanity, people cared for one another, and showed a kindness that knew no barriers of race. But then that popinjay Mosley was released from prison, where he had spent most of the war. And our lives were to change for the worse…”

Says the cool pensioner, his voice tightening a little with anger that seems undimmed by the passage of time:

“Suddenly, there were fascists preaching hate on every corner These rabble-rousers were the same Nazi sympathisers who had spent the war years in prison, and were now starting up where they had left off.

“Their speeches and their literature depicted us, the Jews, as coarse, ugly caricatures with long beards and dirty finger-nails, dressed in black gabardine. And they hurled the same abuse that I remembered from the 1930s, when we had to walk through Paddington in a crocodile to school. I was too young to do anything about it then but I had never forgotten the fear.

“En masse, when you’ve got a thousand throats all screaming “the yids, yids, we’ve gotta get rid of the yids”, that is pretty terrifying. They’d wear uniforms, insignia, the whole thing. I don’t remember exactly when we decided to fight back, but the pictures we were seeing from Auschwitz and Buchenwald and Dachau changed the shape of our rage, and the slogan “Never Again!” became a command.”

And so it was that the fresh-faced Cockney (the measured, mid-Atlantic tones of the modern Vidal are the product of elocution lessons taken in the 1950s) signed up with the 43 Group, a crudely armed paramilitary force which began as 43 Jewish ex-servicemen and which by its peak was to number more than 1,000 Jews and gentiles, men and women.

Sassoon, who heard about it on the Whitechapel grapevine, says:

“We had turned the cheek for the last time. And as a 17-year-old recruit, I was proud to be involved. The men were mostly ex-servicemen, unsung heroes who had fought for five years and had come back to be abused by fascists as they walked down the street. They didn’t want anything but peace, but it was disgusting that having just fought a war against Nazism, home-grown fascists were allowed to start reorganising. Something had to be done.

“As soon as I showed an interest I was assigned to a particular group, like everyone else. My guv’nor in the East End group was Jackie Myerovitch, and from him we would get a phone call to be in a certain place at certain time to disrupt a Mosley speech, or one of the pubs. There was even a plot to kidnap the quisling himself, strip him and dump him naked in Piccadilly Circus.

“Then these incidents, or actions, would begin. It was pretty terrifying. I remember Jackie being badly slashed, but there was no time to worry about such things.”

A boy amongst hardened fighting men, Sassoon was to become one of the toughest and keenest of all the informal soldiers.

“He was only a kid, but he was a tough little shtarka,” says a former group commander and comrade, retired paratrooper Gerry Lambert, using a Yiddish word that corresponds, more or less, to hard man.

Many former 43ers remember Vidal well and his solid reputation of standing firm when the fists started flying, one veteran saying:

“To think what a big deal hairdresser he would become. You would never have guessed to see him there, deep in the fray. At that time he was just the sort of guy you wanted standing right by your side when the fighting started. And back then, of course, we often had to break the law. It was out of necessity.

“We had to use the same weapons as the fascists did: knuckle-dusters, coshes, and cut throat razors.”

Inevitably the police arrested hundreds of people during the five years of organised violence and on at least one occasion the young Sassoon found himself in jail.

“I’ve lost count of the number of actions I was involved in, but I do remember the night we were told to go up to Kilburn, to break up a fascist meeting. There was a real punch-up. We chased the blackshirts into a pub, but we were ourselves being chased by the police.

“They arrested us on the spot, threw us in the back of the van and started calling us filthy foreign Jew bastards. They beat the hell out of my old friend Big Mo Levy and threw us in a cell for the night.”

Sassoon pauses to reflect on his days of valour in a different world, before he succeeded Teasy Weasy Raymond as crimper to the stars, style pioneer to the sixties counter culture, and went on, after laying down his scissors in the 1970s, to create a range of hair products that have helped him to amass a 100 million fortune, part of which funds the renowned Vidal Sassoon Centre for the Study of Antisemitism and Xenophobia at the Hebrew University, Jerusalem.

Now the most famous hairdresser in the world, he recalls:

“When we went up before the judge the next morning we told him about the police brutality, but he just said, ‘those sort of things do not happen in Britain, now go home and be good boys’.”

He laughs and repeats again what he has been saying all along:

“I was just a private, foot-soldier. I wasn’t a particular hero.”

In 1948, he left Britain to fight in the Israeli War of Independence. He would have liked to have stayed in the new country, attended university and become an architect, but his family’s East End poverty forced him back to London. “I thought if I had to do hairdressing I’d try and be the best I could at it,” reflects Sassoon. The rest is history.

At every turn, his modesty will not allow him to describe his double life as anything out of the ordinary for the time and place:

“I took a few knocks, but we did physical damage to them, too. That’s what happens when there is hate. Violence for its own sake is nonsense, but in defence of one’s children and one’s elders is a necessity.“

But to show up for work, in a ladies hairdresser’s salon of all places, battered and bruised from a night’s fighting, must have been a surreal position for a young man to find himself in.

“Well, yes. I had to have a sense of humour. There was one occasion one morning after a particularly nasty tear-up, I went to work at the salon in Mayfair with a badly scratched face and this refined client looked at me and said, “Good God, Vidal, you look terrible. What happened to you?”

“Nothing much, I said. I just fell over a hairpin.”

51 Responses to “Vidal Sassoon, anti-Fascist hero, “harder than the painted nails of his clients””