The Libel Reform campaign has said it is “delighted” with the government's plans to introduce a Defamation Bill, outlined in the Queen’s Speech today.

The Libel Reform Campaign has said it is “delighted” with the government’s plans to introduce a Defamation Bill, outlined in the Queen’s Speech today. 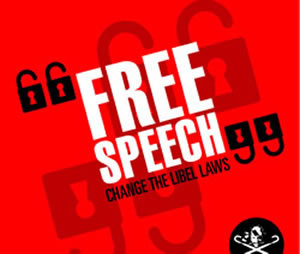 The Bill will introduce changes to defamation law which will rebalance freedom of expression with an individual’s ability to protect their reputation – defamation will only have occurred if “serious harm” has been caused.

The changes, which affect England and Wales only, will also see a tightening up of rules to avoid ‘libel tourism’ in relation to litigation involving individuals who are not domiciled in Britain or another European Union member state.

The Ministry of Justice say the new bill will ensure the threat of libel proceedings is not used to “frustrate robust scientific and academic debate”, and there will be a defence for the media of “responsible publication on matters of public interest”.

Jo Glanville, editor of Index on Censorship, praised the proposals:

“We have now have a chance for libel legislation that’s fit for the 21st century. The end of the single publication rule and greater protection for internet service providers will help to put an end to the chilling effect online.”

While Tracey Brown, managing director of Sense About Science, said she was “really pleased”:

“We and thousands of others have campaigned to stop the libel laws’ bullying and chilling effects on discussions about health, scientific research, consumer safety, history and human rights.

“We are really pleased to see the government has moved closer to honouring its promise of a fairer law and protection of free speech in today’s Queen’s Speech. This opens the way to developing a law guided by public interest not powerful interests.”

“The inclusion of the defamation bill in the Queen’s Speech marks a major milestone for The Libel Reform Campaign. It can’t be right that ordinary people risk their livelihoods when getting caught up in costly libel proceedings.

“The government has already investigated ways to weed out unmeritorious claims, whereby claimants will have to show serious harm before a case progresses.

“If passed by Parliament, these types of amendments will not only make our libel laws fairer, but go some way in restoring London’s reputation from being a ‘town called sue’.”

All three main parties backed libel reform in their manifestos.

“[We will] bring forward new legislation on libel to protect the right of defendants to speak freely.”

“We will review and reform libel laws to protect freedom of speech, reduce costs and discourage libel tourism.”

“[We will] protect free speech, investigative journalism and academic peer-reviewed publishing through reform of the English and Welsh libel laws – including by requiring corporations to show damage and prove malice or recklessness, and by providing a robust responsible journalism defence.”

With Ed Miliband backing the proposals in his Commons response this afternoon, it is to be hoped the legislation makes it on to the statute book without delay, finally dragging our libel laws from the 19th century into the 21st.