A group of leading economists and social scientists have said austerians are guilty of “bad economics, bad arithmetic and ignoring the lessons of history”.

A group of leading economists and social scientists have warned Europe’s leaders that ever-more austerity – as proven by today’s abysmal GDP figures – will not work, describing those pushing such solutions as guilty of “bad economics, bad arithmetic and ignoring the lessons of history”. 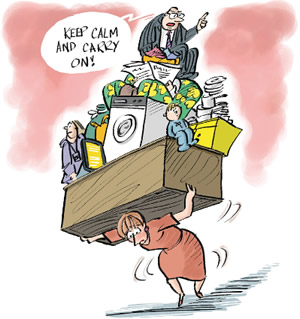 The warnings are contained in a new Oxfam pamphlet, “Be Outraged: There are Alternatives” (pdf), published this week.

The publication calls for a new economic approach including government action to promote growth and transform the financial sector from a “bad master to good servant”, and makes the case for a Financial Transactions Tax to control speculation and act as a valuable source of revenue.

“Be Outraged” further warns that the austerity approach to reducing deficits and debt is “counterproductive” – leading to a “downward spiral of incomes and government revenues” and making it more difficult to reduce the debt and undermining growth prospects.

The main related problems that need urgent action, the pamphlet says, are:

Unemployment: More than 10 per cent of European adults are unemployed, up by 50 per cent since 2008 – more than one in five (22%) of under-25s are unemployed and in some countries above 40%;

Impact on women: Cuts in public spending usually leave women to pick up the pieces and children to bear the brunt – it is counter-productive to sacrifice their rights and support in the name of credibility in financial markets;

Inequality: Top incomes have soared in the UK and US especially – the globe’s richest 1 per cent (61 million people) earn the same as the poorest 56 per cent (3.5 billion);

Lack of international support for a global recovery: Action, including the fiscal stimulus, agreed at the 2009 G20 in London restored recovery for a year, helping global growth reach 4 per cent in 2010 – a new stimulus and renewed coordination is badly needed now;

Finance: The sector should serve the needs of the real economy and help manage and mitigate risk – for the past two decades it has done neither.

• Balls: “Complacent and out of touch” Cameron and Osborne to blame for deeper double-dip 26 May 2012

The publication (pdf) concludes that policies to deal with each of these problems are illustrated by examples of successful action – mostly taken from emerging and developing countries.

It says Europe’s leaders should now “learn from developing and emerging economies”, in particular the responses by Korea, Indonesia, Thailand and China to the 1997-2000 East Asian crisis and the recent successes of countries such as Brazil, Argentina and Thailand in reducing inequality.

Whether Messieurs Cameron, Clegg and Osborne will listen, however, is anyone’s guess.

18 Responses to “Oxfam: Austerians guilty of “bad economics, bad arithmetic and ignoring the lessons of history””