Pasty makers celebrate today following chancellor George Osborne’s pasty tax U-turn - but how will he make up the £35 million lost?

Pasty makers are celebrating today following the government’s U-turn on the infamous pasty tax, but how will the Treasury make up the £35 million that today’s reversal has cost? 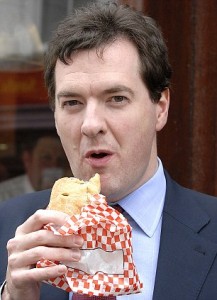 Pasties, sausage rolls and rotisserie chickens filled the headlines in March, after the 2012 Budget targeted hot food with VAT increases in order to ‘correct anomalies and loopholes’.

The move enraged the baking industry, forcing them to start the Say NO to the 20% Pie Tax campaign and popular high street baker Greggs also saw its shares drop significantly, leading them to claim they may have to “sack staff and shut stores”.

Continual lobbying from MPs and industry members has forced George Osborne to back down on his intended VAT changes to hot food and caravans. The U-turns do very little for a government that was already suffering from poor credibility.

Having to admit the £35 million loss to the BBC, treasury minister David Gauke claims the budget is still fiscally neutral:

“The cost of this is around about £35 million.

“But in the great scheme of things, if you look at all the changes we have announced, with the two changes we have made today, we have still got a fiscally neutral budget – we are not borrowing any more than we previously planned.”

Shadow Chief Secretary to the Treasury Rachel Reeves MP described the U-turn as a “total and utter shambles”:

“These partial U-turns, just a few weeks after ministers were defending the pasty tax and caravan tax, show just how ill-thought through the Budget was and how out of touch David Cameron and George Osborne are.”

The comical ‘pasty tax’ is now a thing of the past but the more serious ‘granny tax’ is still planned to go ahead, with 4.4 million tax-paying pensioners expected to lose out by £84 a year.

Although today’s announcement will be treated as a victory for some, the two-month saga over a relatively pointless tax has drawn focus from the stagnant growth and unemployment crisis that this country is suffering from. Your local baker is now better off but the country as a whole would have been a lot better off had this time-wasting tax not been dreamt up by this arrogant and out of touch chancellor in the first place.